‘They Saved My Life:’ Widower thanks pizzeria and customers for ‘pay it forward’ pie 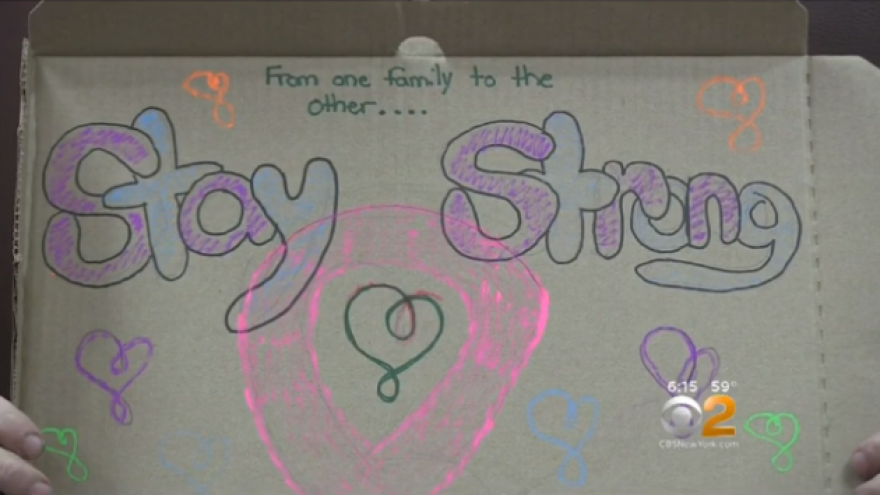 RONKONKOMA, N.Y. (CBSNewYork) — People on Long Island are “paying it forward” through pizza, and one man says a free pie inspired him to stay strong.

When 59-year-old Dennis Kust walked into the Ronkonkoma pizzeria in Suffolk County last month, he says he had lost his will to live after his wife, Cheryl, passed away following a long, painful battle with cancer.

Struggling with deep depression, Kust didn’t realize the pizzeria’s owners and staff had started a pay it forward with pizza campaign. Good-hearted customers were stepping up to pay for pies to be given to volunteers, police officers, single moms, people who lost their jobs, and folks in despair, like Kust.

When he opened the box for his free pie, he started to cry. The anonymous donor had inscribed the very same message he had heard every day from his dying wife.

He returned to thank the store’s owners and give them a handwritten letter, explaining how the simple act of kindness had saved his life.

“You don’t know me, but on March 25th, you turned my life around,” co-owner of Albert’s Pizza Rich Baer reads aloud from the letter.

Baer says he’s read the letter dozens of times and it always brings him to tears.

“When you do something nice, it works. You see somebody benefit…,” he says, choking up.

“Sorry to make you cry. You made me happy,” Kust tells him.

“It was a good crying,” Baer replies.

The pay it forward pizza movement is growing rapidly as nearly 75 customers have stepped up to purchase a pie for someone else. As in Kust’s case, most are donating anonymously.

“I wanted somehow to thank the people that actually bought it for me and let them know that they saved my life,” he says.