They had a 'pretty good go at him': Quick-thinking heroes tackle train gunman 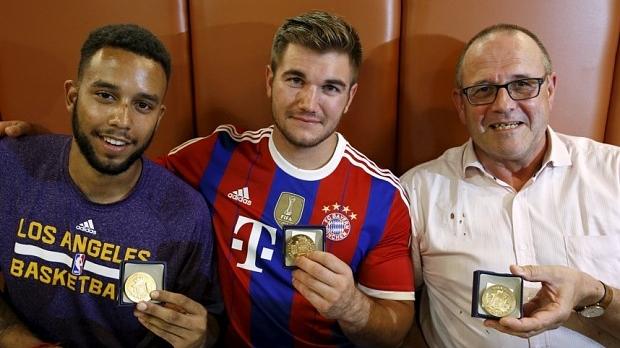 (CNN) -- The struggle was brief, bloody and chaotic.

The high-speed train was zipping from Amsterdam to Paris on Friday when a shirtless man emerged from the bathroom -- a rifle slung over his shoulder, witnesses said.

A British passenger and three Americans -- a civilian, an Air Force member and a National Guard member -- jumped into action. They quickly tackled him, possibly averting a massacre aboard the train.

\"I saw a man with what I think was an AK-47 -- anyway, it was some kind of machine gun or submachine gun,\" said the British man, Chris Norman.

\"My first reaction was to sit down and hide. Then I heard one guy, an American, say, 'Go get him' and I heard another American say, 'Don't you do that, buddy' or something like that.\"

By the time the suspect was subdued, three people had nonlife-threatening injuries, said Anthony Blondeau, a spokesman for the city of Arras in northern France, where the train pulled up after the incident and the suspect was arrested. One of the Americans who subdued the gunman was among the injured.

The identity of the suspect is not yet fully established, but he could be a man of Moroccan origin, who lived in Spain in 2014 and Belgium in 2015 and had ties to radical Islam, according to Cazeneuve.

Norman told reporters he realized it was a terrorist attack \"the moment I stood up and saw a guy with an AK-47.\" He said \"rapid reasoning\" prompted him to jump in and help.

\"My thought was, 'OK, I'm probably going to die anyway, so let's go.' I'd rather die being active, trying to get him down, then simply sit in the corner and be shot.\"

He added later, \"We've seen enough of these kinds of attacks to understand that they will kill everybody once they get started, and my point of view was, two guys had already started tackling him. Maybe they needed some help. ... I said to myself, maybe I have a chance if I get up and I help as well.\"

Interior Minister Bernard Cazeneuve said Saturday in Paris that the French passenger, whose name wasn't immediately known, was the first to intervene, followed quickly by the Americans.

Norman said the Frenchman accosted the gunman in car 12, and that's when the gunman took out all of his weapons and ran to car 13, where Norman and the Americans were sitting.

The suspected attacker was armed with a Kalashnikov assault weapon, nine chargers, a Luger automatic pistol, a 9mm charger and a box cutter, Cazeneuve said.

The identity of the suspect is not yet fully established, but he could be a man of Moroccan origin, who lived in Spain in 2014 and Belgium in 2015 and had ties to radical Islam, according to Cazeneuve.

Norman said the suspect appeared to be North African and was \"quite small in build, slim.\" He added, \"I didn't have any problems overcoming him. He was not necessarily very strong.\"

A senior European counterterrorism official told CNN terrorism analyst Paul Cruickshank that the suspect was linked to Belgian investigations into radical Islamist networks. The official said Belgian authorities are looking into whether the suspected gunman traveled to Syria.

The three American men were traveling together when they heard shattering glass and people running, said Peter Skarlatos, the brother of Alek Skarlatos, one of the Americans who tackled the suspect.

They saw the gunman and decided to confront him, he said.

\"My friend Alek Skarlatos yells, 'Get him!,' so my friend Spencer Stone immediately gets up to charge the guy, followed by Alek, then myself,\" said Anthony Sadler, the civilian among the three. Stone is an Air Force member while Skarlatos is in the National Guard.

\"The three of us beat up the guy,\" Sadler said. \"In the process, Spencer gets slashed multiple times by the box cutter, and Alek takes the AK away.\"

Skarlatos seized the rifle and hit the suspect in the head with the muzzle.

\"I begin to tie him up with help from Chris, another passenger,\" Sadler said. \"I notice a man had his throat cut at which (time) Spencer begins to apply pressure to the neck wound before he bled out.\"

Spencer had injuries in the head and neck, and almost had his thumb cut off, according to Norman.

Stone and Sadler live in Sacramento, California, while Skarlatos is from Roseburg, Oregon.

Skarlatos had joined his friends on a European vacation after returning from Afghanistan.

The attacker, Norman said, \"put up quite a bit of a fight. But Spencer Stone is a very strong guy. He actually held him very well and Alexander and Anthony had a pretty good go at hitting him.\"

Norman said he helped hold the attacker's right arm so he couldn't get hold of the gun, and a French man took control of his left arm.

\"We were able to immobilize him on the ground, and then Alexander ... went to see elsewhere in the train if there were any other terrorists, and we saw at that moment somebody was injured.\"

Despite his wounds, Spencer was able to help the injured passenger, who was hurt in the neck, by applying first aid to stop the bleeding, Norman said.

Cazeneuve said a dual French-American citizen sustained a gunshot wound as he was in his seat aboard the train.

A third injured person was French actor Jean-Hugues Anglade, who has a light hand injury, said Blondeau, the spokesman for Arras.

The train was rerouted to Arras, 115 miles (185 kilometers) north of Paris, where the suspect was taken into custody.

Cazeneuve said the anti-terrorism prosecutor's office in Paris was investigating and that Belgian authorities have also opened their own investigation.

The suspect has been transferred from the Arras police station to the anti-terrorist police unit and France's external intelligence agency, the General Directorate for External Security (DGSE), in the northwestern suburbs of Paris, Cazeneuve said.

The man is currently being interrogated as part of a detention that can last up to 96 hours, he said.

The minister urged caution about the suspect's identity, \"which is not yet fully established with certainty at this hour.\"

If the identity claimed by the suspect is confirmed, \"it would correspond to that of an individual of Moroccan nationality, who is 26 years old, flagged by Spanish authorities to French intelligence services in February 2014, due to his ties to the radical Islamist movement,\" Cazeneuve said.

A second security source said French intelligence knew the suspect. It appeared he was sympathetic to ISIS, the official said, but a full determination on his motive and loyalties had yet to be reached.

The train attack has not officially been classified as an act of terrorism, although the senior European counterterrorism official indicated it could be.

French President Francois Hollande and Prime Minister Manuel Valls thanked the American and French men who intervened. Hollande praised their \"exceptional courage and their efficiency to prevent a tragedy,\" his office said.

President Barack Obama \"expressed his profound gratitude for the courage and quick thinking of several passengers, including U.S. service members, who selflessly subdued the attacker,\" a White House official said.

Gen. Philip Breedlove, commander of the U.S. European Command, said, \"These men are heroes. Actions like this clearly illustrate the courage and commitment our young men and women have all the time, whether they are on duty or on leave.\"