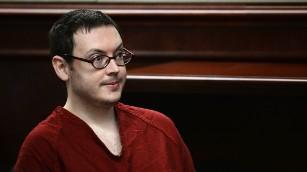 Holmes, a 27-year-old former grad student, received one life term for each person he killed, plus 3,318 years for the attempted murders of those he wounded and for rigging his apartment with explosives. He is not eligible for parole.

\"It is the court's intention that the defendant never set foot in free society again,\" Judge Carlos A. Samour Jr. said after imposing the sentence Wednesday. \"If there was ever a case that warranted a maximum sentence, this is the case. The defendant does not deserve any sympathy.

\"Sheriff, get the defendant out of my courtroom please.\"

There was a smattering of applause as Holmes, shackled at the waist and wearing red prison garb, was led away from the courtroom where he has spent most of his days since jury selection began in January.

Prosecutor George Brauchler said he believed the sentence was the fourth longest in U.S. history. He described the judge's command to promptly remove Holmes from the courtroom as \"the right exclamation point\" to bring a painful, difficult trial to a close.