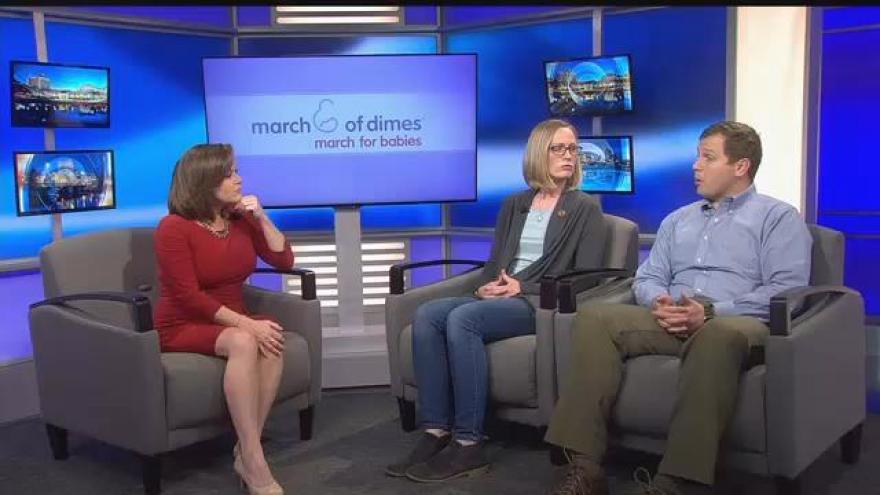 It was during a routine 20 week ultrasound that Joe and Laura Schmidt learned their daughter has a spinal cord defect.

A diagnosis of spina bifida was confirmed and they were immediately referred to the Fetal concerns Center at Children's Hospital of Wisconsin.

In part because of programs funded by March of Dimes, the Schmidts were able to prepare for what was to come.

Leah Grace was welcomed into the world by a NICU team on June 4, 2014.

She underwent spinal surgery at six months and continues to amaze everyone with her abilities.

She will face lifelong medical challenges but her family says her future is bright.

The Schmidts say they watched first hand the good work of the March of Dimes for other families who were in the NICU far longer than they were.

Spina bifida, in fact, is the most common permanently disabling birth defect.

Hopes are high that fewer children are born facing these struggles form birth.

And the first steps towards securing that future start Saturday at Veterans Park with the annual \"March for Babies.\"

\"We felt it was an opportunity to give. Because our situation turned out so well. We wanted to help other families,\" said Joe Schmidt in a live interview on the CBS 58 News at 4.

\"No need to have a connection to March of Dimes to take part,\" added Laura. \"Just come out and walk with us. Register at the event. Just a good day to get out and walk along the lakefront and support the cause.\"