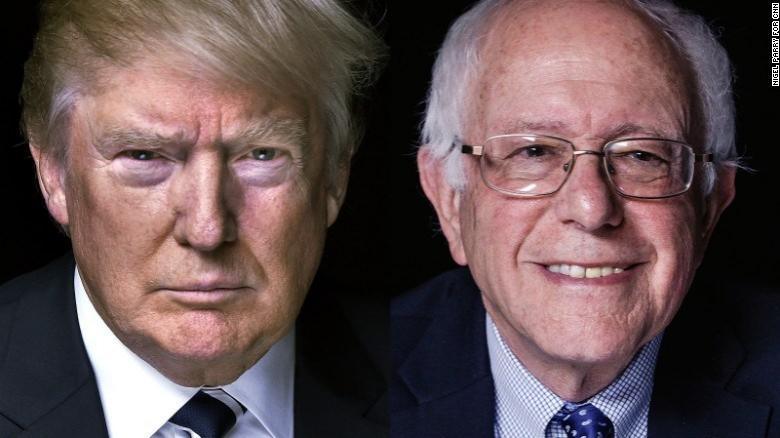 (CNN)On the eve of New Hampshire's presidential primaries, a new CNN Poll of Polls finds both Donald Trump and Bernie Sanders are holding on to substantial leads in their respective races, but each faces an opponent whose support is on the rise.

Sanders' 54% to 40% advantage over Hillary Clinton is down slightly from a 55% to 37% lead in the previous Poll of Polls. No public polling has found Clinton in the lead in New Hampshire since November.

Trump tops the GOP field with 31%, well ahead of Marco Rubio's 15%. Rubio has picked up four points since the previous New Hampshire Poll of Polls, the biggest change in the averages in the last week. Ted Cruz follows with 13%, John Kasich at 11% and Jeb Bush at 10%. This pack of four -- Rubio, Cruz, Kasich and Bush -- has been jockeying for second place in the state for some time. The fifth candidate often included in the group, Chris Christie, has generally seen his support dwindle, and now stands well behind, dropping two points in this week's Poll of Polls to an average of 5%. Carly Fiorina ties Christie at 5% and Ben Carson rounds out the group with 3%.

But the overall wide margins aren't an indicator that the political world can turn its attentions away from the Granite State just yet. All of the polls included in the Poll of Polls were completed prior to Saturday night's Republican debate, however, and it remains to be seen how that will impact voters in the final days of the campaign.

Though any candidate would be happy to hold a lead like those held by Trump and Sanders, the polls also indicate large chunks of the electorate haven't yet finalized their decisions. In the latest CNN/WMUR tracking poll, for example, fully 30% of likely Republican voters said they hadn't yet decided whom to support, as did 16% of likely Democratic voters.

It's worth noting that many of the polls included in this week's update to the Poll of Polls are tracking polls, meaning interviews are conducted daily and each release includes results from the previous three or four days of interviews, dropping out the oldest day and tacking on the most recent day as a replacement. In those cases, only the most recent release from each poll is used in the average, so that no set of daily interviews is counted more than once in the average.Though the outcome of Tuesday's New Hampshire primary is by no means certain, one thing we can tell you for sure: Pollsters have been very busy.

The New Hampshire presidential primary is a special case for pollsters, and tends to attract more polling than other primary states. Compared with Iowa, where low-turnout caucuses mean that finding actual caucusgoers can require tens of thousands of calls to adults or registered voters, New Hampshire is a breeze to poll. In years where both parties hold contested primaries, more than half of registered voters in the state typically show up to vote, a rate better than many places see in general elections, let alone primaries. In the 2008 New Hampshire primary, more than 525,000 people showed up to vote in a state with a voting eligible population of right around 1 million. That means the chances of reaching a likely voter with a random sample in the state are pretty good.

New Hampshire is also a notoriously late-deciding state, which means pollsters tend to want to be in the field as close to Election Day as possible rather than risk missing a late swing and look wrong. In that same 2008 contest, a late, wide swing on the Democratic side that went undetected by nearly all public pollsters in the state prompted the polling industry to investigate what went wrong. Though the American Association for Public Opinion Research didn't settle on one definitive source of the polling error in 2008, their report provides a helpful look at all the things that can go wrong in polling a late-deciding, high-interest electorate.So what did Iowa's entrance polls tell us about the landscape in New Hampshire?

For one thing, late-deciders are a real thing in this race. On the Republican side, 35% of caucusgoers said they made up their minds in the last few days, and those voters broke more for Cruz and Rubio than they did for Trump.

On the Democratic side, they showed just how strong Sanders' support is among younger voters. The Vermont Senator topped 80% support among those under age 30, an almost unheard of level of support. For comparison, in 2008 in Iowa, Obama, whose mobilization of young and minority voters is the goal for many Democratic candidates, netted 57% in that same age group. And this time around, although Clinton garnered higher support among women than among men in all other age groups, among the under-30s, there was no gender gap at all.