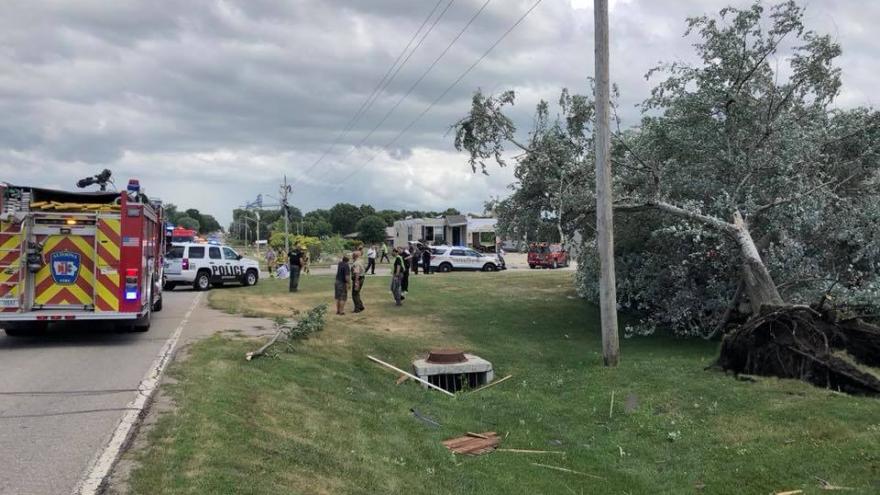 DES MOINES, Iowa -- A flurry of tornadoes swept through central Iowa, injuring at least 17 people Thursday, flattening buildings in three cities and forcing an evacuation of a hospital. The tornadoes formed unexpectedly and hit the cities of Marshalltown, Pella and Bondurant as surprised residents ran for cover.

Hardest hit appeared to be Marshalltown, a city of 27,000 people about 50 miles northeast of Des Moines, where brick walls collapsed in the streets, roofs were blown off buildings and the cupola of the historic courthouse tumbled 175 feet to the ground.

One tornado slammed into an agricultural machinery plant in Iowa as some people were working, injuring at least seven people. That tornado hit in the town of Pella, about 40 miles southeast of Des Moines.

Pella Police Lt. Shane Cox told CBS affiliate KCCI-TV the injured were rushed to a hospital. Pella Regional Health Center spokeswoman Billie Rhamy confirmed Thursday night that seven people inside the plant were treated for minor injuries and released. The factory, which has about 2,800 employees manufacturing industrial and agricultural equipment, was hit by a tornado around 4 p.m. local time.

One of the factory's several manufacturing buildings sustained extensive damage, with metal strewn across the parking lot and across the street into a cornfield. Vehicles were overturned and piled onto others.

Vermeer spokeswoman Liz Sporrer said via email Thursday that company officials were assessing the damage. The company's vice president of operations says the plant activated its storm warning system and workers where in shelters when the storm hit.

Varcoe said all 40 of its patients were being transferred to the health system's hospitals in Waterloo and Grundy Center.

The tornado hit as clothing shop owner Stephanie Moz, her husband and their 2-month-old baby were taking a lunch break in Marshalltown.

Moz says the storm broke out the shop's windows, ruined the clothing and hats they had on display and destroyed her husband's vehicle, but she's relieved. "We went through a tornado and survived. I'm happy."

She her a storm siren and her mother texted her to seek shelter, so she and her son, Fredy Jr., rushed to the basement. Moz's husband looked outside and then ran back, shouting "Get in the basement. It's right over us." They could hear booms and crashes, and a gust of wind blew through the basement, but they emerged safely. Moz says, "We're OK. Not a scratch."

A woman working at Hammer Medical Supply in the city's downtown said her building suffered damage, as did nearby buildings including The Orpheum, a theater built in 1948.

Iowa State Rep. Mark Smith, who lives in Marshalltown, told KCCI-TV that the area likely will be declared a disaster area. Smith said his house and neighborhood were not damaged, but much of downtown and surrounding homes have been.

"There are houses with windows out, houses without roofs," he said. "It's just an absolute mess."

Additional funnels were reported as the storm moved east of Des Moines past Altoona, Prairie City and Colfax.

Several homes in the city of Bondurant suffered damage, according to KCCI-TV. The station reports that the roof of one home was torn completely off, while several others are missing chunks of roofing. Also, an RV flipped against another home and caused damage.

Alex Krull, a meteorologist with the National Weather Service in Des Moines, said that forecasting models produced Thursday morning showed only a slight chance of strong thunderstorms later in the day.

"This morning, it didn't look like tornadic supercells were possible," Krull said. "If anything, we were expecting we could get some large hail, if strong storms developed."

Krull said the weather service expected a severe weather threat to remain in effect through 7 p.m. to 8 p.m. as the storms moved east and north.