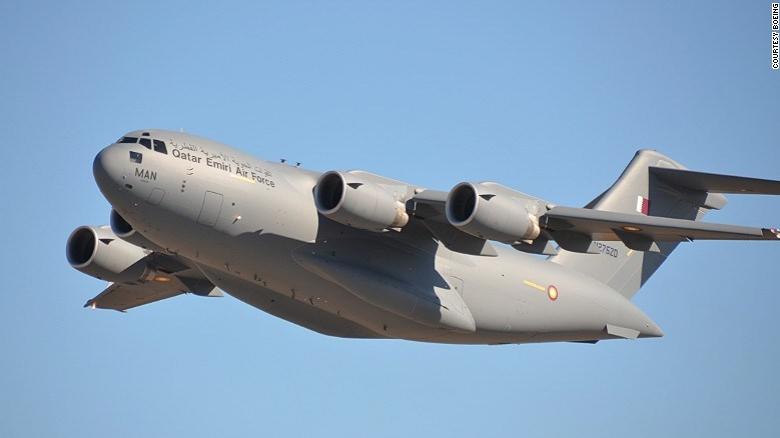 (CNN)That's it. There ain't no more. After 24 years of flight, Boeing stopped making one of the biggest airplanes in the world on Sunday.

With aviation enthusiasts cheering and snapping photos, the final C-17 Globemaster III took a victory stroll along a runway at an airport in Long Beach, California, not far from the Boeing factory where workers crafted more than 270 of these amazing machines.

A large group of teary-eyed fans of the plane gathered at the airport to witness the last flight out. They said goodbye to a jet that employed thousands of workers at the Long Beach facility. "It was a very emotional event," Aviation Week and Space Technology senior editor Guy Norris said. "The impression I got was that a lot of these folks or their family members had worked on the production line at one time or another."

During its 3 million total flying hours, the C-17 delivered troops, military equipment and humanitarian aid around the world.

"The plane did a sort of pirouette in front of the crowd -- a three-point turn," Norris said. "Very unusual ... almost like it was showing off a final display of its handiwork to the workforce. Then it took off to the north, did a turnaround and then did a low pass over the factory, before executing a dramatic pullup on its way toward the horizon. It was quite a spectacle, really."

The Globemaster's destination was a storage facility in San Antonio, where it will be delivered to the Qatar air force. Breaking down the numbers, Boeing said it has delivered 223 C-17s to to the U.S. Air Force and 48 to international customers Canada, the United Kingdom, Australia, United Arab Emirates, Kuwait, Qatar, India and NATO.

‎Total delivered so far: 271. Four are still in storage and expected to be delivered to Qatar in 2016."This is truly the end of an era," said Nan Bouchard, Boeing's top C-17 executive, in a statement. "It's a sad day, but one that all of the Boeing employees and suppliers who have worked over the years building this great aircraft can be proud of."

The end of production comes as Boeing plans to shut its Long Beach factory, which employed 2,200 workers. Not all will be losing their jobs. Many are retiring or transferring to other facilities. It's just the latest blow to California's aviation industry, which has been losing jobs for decades.

The fact that the final C-17 was able to attract huge crowds is a testament to the airplane. It's truly amazing. For such a huge aircraft it flies with almost fighter-like agility, said Norris. The Globemaster's short landing capability allows it to touch down on incredibly short runways -- adding to its versatility as an airlifter. In fact, Boeing says the C-17 can land on a runway as short as 3,000 feet (914 meters.)

"It really is a remarkable machine," Norris said.

Part of the C-17's success story is the fact that it recovered so well from such a bad start. "The program was threatened with cancellation because of cost overruns and structural issues," Norris said.

But just because they stopped making them doesn't mean they won't be around. The C-17 is expected to continue serving for decades.

Boeing says it will support the aircraft for such a long time into the future that Norris said it's very possible his 20-year-old son's grandchildren could be flying on it or piloting it. "I don't really see this thing being replaced probably until the 2040s or even 2050s," he said.

There are long-term projects being offered by aircraft makers that might be hired to develop a replacement U.S. military airlifter someday. They include hybrid wing-body designs, Norris said. They'll certainly break the frontiers in terms of efficiency and propulsion technology when they come along.

Meanwhile, there is one other C-17 that has been completed and that has been flown to storage in San Antonio, but it hasn't yet been sold.

"So, if you've got a few million dollars to spare," Norris joked, "there's one un-used C-17 waiting for you."