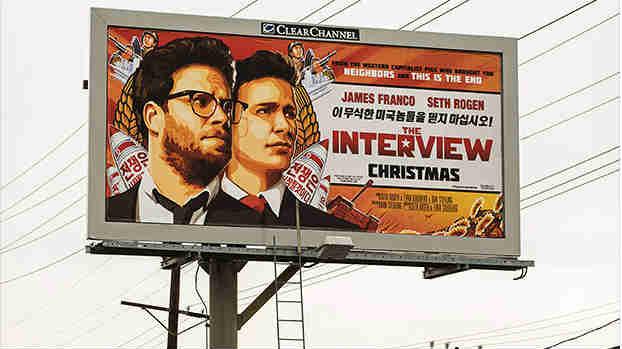 Sony said in a statement that it will become available at around 1 p.m. ET on Christmas Eve.

The extraordinary announcement encapsulated days of negotiations between Sony and a number of potential Internet distribution partners.

As a result, \"The Interview\" will have a historic simultaneous release in both living rooms and about 300 independently-owned theaters across the United States.

An earlier plan to rent \"The Interview\" through Apple's iTunes store broke down, according to two of the sources, but it could re-materialize sometime after Christmas.

\"With what looks like a seriously limited release, limited supply is yielding substantial demand,\" the fan web site Moviepilot said.

An online stream will provide more supply. YouTube has a two-year-old movie rental system that it has tested mostly with relatively obscure titles; \"The Interview\" would be its biggest yet.

The online distribution deals are groundbreaking in Hollywood -- but also awfully contentious. Owners of major theater chains have steadfastly opposed proposals for simultaneous physical and digital releases, a concept known in the industry as a same-day-and-date release.

It's been tried, with varying success, for some documentaries and niche dramas, but never for a big, broad comedy like \"The Interview,\" which was originally meant to premiere on 2,000 to 3,000 screens.

But extraordinary circumstances call for extraordinary movie release strategies. With independent art house theaters but not the big chains on board for a Christmas release, Sony became intent on screening the film online in some form.

Talks with YouTube and other potential partners were delayed by negotiations over financial terms and nagging questions about whether streaming the film will make digital distributors vulnerable to hacking.

The movie studio's CEO, Michael Lynton, hinted at the talks in his Tuesday afternoon statement about the limited theatrical release.

\"We are continuing our efforts to secure more platforms and more theaters so that this movie reaches the largest possible audience,\" he said.

The independent theater release plan came almost a week after Sony originally canceled the Christmas release of \"The Interview\" in up to 3,000 theaters. Backlash to the decision was fierce, including from President Obama, who said the movie studio had made a mistake.

Since then, Sony executives have stayed in close touch with White House officials, appraising them of the studio's efforts to seek distribution.

Administration officials signaled that they were pleased with the theatrical and digital plans, and on Tuesday a White House spokesman said so publicly, with a statement that \"the president applauds Sony's decision to authorize screenings of the film.\"

\"As the president made clear, we're a country that believes in free speech and the right of artistic expression,\" the spokesman added.

On Wednesday the Republican National Committee chair Reince Priebus concurred. In a followup to his Saturday message calling on theater owners to support the movie, he said the renewed Christmas release \"was the right decision.\"

Priebus added, \"Anything else would set a horrible precedent and allow our freedom to be ceded to the whims of a totalitarian regime.\"

A few minutes after Tuesday's theatrical announcement, the star of the movie Seth Rogen tweeted: \"The people have spoken! Freedom has prevailed! Sony didn't give up! The Interview will be shown at theaters willing to play it on Xmas day!\"

On Instagram, co-star James Franco called it a \"victory\" and said \"the people and the president have spoken.\"

\"The Interview\" is about an assassination plot against the North Korean dictator Kim Jong-Un. It is widely believed that Sony Pictures suffered a cyberattack last month partly due to North Korea's fury over the movie.

In light of last week's threat against moviegoers and ongoing concerns about security at theaters, an FBI official said \"we are fully engaged with Sony on the decision\" to release the movie.