The holy grill: A guilt-free superfood that tastes like bacon 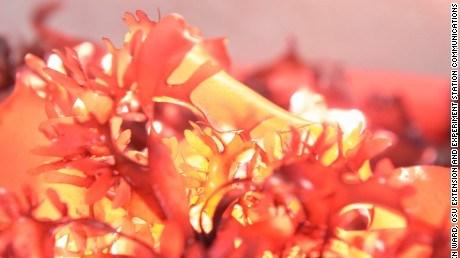 (CNN) -- Food lovers might no longer have to choose between tastiness and healthiness.

As will be familiar to anyone miserably chewing through leaf after leaf of kale in a beleaguered attempt to shed a few pounds, it's hard to banish thoughts of cheeseburgers, pizza or -- many a dieter's Achilles' heel -- bacon.

But some of those cravings, at least, might soon be banished, if researchers at Oregon State University are correct.

Chris Langdon, a researcher at OSU's Hatfield Marine Science Center, has along with colleagues created and patented a new strain of dulse, a red seaweed which boasts amazing nutritional benefits.

It also, and perhaps more importantly, tastes like bacon, according to its creators.

He told the University's newspaper that it was \"pretty amazing.\"

\"When you fry it, which I have done, it tastes like bacon, not seaweed. And it's a pretty strong bacon flavor.\"

Several Portland chefs, as well as the Food Innovation Center in Portland, are experimenting with the new ingredient, including adding it to peanut brittle and trail mix, and even candied dulse chips added to ice cream.

\"Frying dulse was one of them, but it turns out that others have tried this too and come to the same 'bacon-like' conclusions.\"

Dulse, which is an \"excellent source\" of minerals, vitamins and antioxidants and contains a high percentage of protein, could be the answer we're all looking for, he and his co-workers say.

\"Dulse is a superfood, with twice the nutritional value of kale,\" Chuck Toombs, a faculty member in OSU's College of Business, who worked with Langdon to make the strain a commercial prospect, added.

\"OSU had developed this variety that can be farmed, with the potential for a new industry for Oregon.\"

Langdon says that he anticipates dulse becoming a more common bacon replacement for people who are concerned about their cholesterol levels or who do not eat meat due to other dietary or religious reasons. He says the research team have received interest from vegans and vegetarians, for example.

Its quick growth time is an advantage that the seaweed has over other food sources, especially livestock, which is expensive and time-consuming to rear.

Langdon says it can be cultivated anywhere that there is \"a modest amount of seawater and some sunshine.\"

Sea-farming could be a way of reducing crop-rearing's ecological footprint.

\"Globally, many folks believe that our current methods for rearing farm animals are not ecologically efficient and growing terrestrial crops often depends on the use of large quantities of freshwater for irrigation,\" he says.

\"The advantage of farming sea vegetables, like dulse, is that it does not depend on freshwater supplies and ecologically benefits the marine environment by removing nutrients and dissolved carbon.\"

The acid test will come when they put it on top of a cheeseburger, thus moving one step closer to attaining the holy grail of a delicious, guilt-free snack.