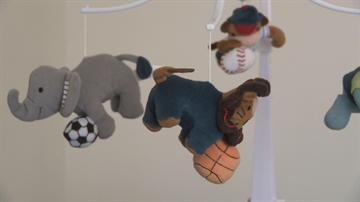 January 23rd, 2011, new mom Taeler Danhieux woke up next to her daughter, Harmony, who felt cold to the touch.

\"I did have a crib for her, she just never slept in it,\" Danhieux said.

\"I was told by family members, 'You're supposed to sleep with your baby, that's what you do,'\" Danhieux said.

The medical examiner report shows Taeler wasn't drunk, wasn't high and wasn't neglectful.  She simply slept with her child; something more than half of all parents will do in the first year with their baby, whether on purpose or by accident.

\"We have the ability to send people up into space, in a vacuum, keep them safe and warm and bring them back to earth, yet we can't keep babies safe next to their parents,\" UWM Associate Nursing Professor Jennifer Doering said.

Doering  devotes much of her time to researching how and why co-sleeping deaths happen.

\"When you have a family of four who have mattresses on the floor and are sharing beds between children and adults simply to get by, it becomes very difficult to implement the same kind of environmental safety around the sleep environment,\" Doering said.

Doering says three black children die for every one white child in Milwaukee, a consistent trend for a quarter century.

\"We've achieved sort of, we call it a floor effect,\" Doering said.  \"We still have these deaths, but we can't seem to drop that rate any lower.\"

So what can be done? There are two main options. Currently, the Milwaukee Health Department hands outs donated play yards to any parent who can't afford one.

But is it working?  Here's what we found.

Since the Cribs for Kids Program launch in 2009, the sleep-related death rate has dropped, but only slightly.  However, in the 17 co-sleeping deaths we studied, roughly one-third of those parents had a play yard in their home that was not being used and in one case it was even broken.

\"We definitely see those cases where we know there was a Pack 'n Play in the home and unfortunately it wasn't used,\" Milwaukee Health Department's Interim Director of Family & Community Health Jessica Gathirimu said.  \"But we don't know how many babies were saved because they do have pack 'n plays.  That's a number we can't count.\"

The other option being considered is legislation.

\"It's not just one community that's been affected by this, it's a statewide issue,\" Representative Samantha Kerkman said.

Rep. Kerkman (R - Randall) has spent the last two years putting together an intoxicated co-sleeping bill.  If you're a parent that's high or drunk, you could go to jail if you hurt or kill your baby.

\"We're all focused on trying to prevent these deaths from happening in the first place,\" Kerkman said.  \"But if a death does occur and circumstances do arise that warrant charges, that if the district attorney feels that he needs to, this would be on the books for him.\"

Some health officials call the bill \"unnecessary\".  Dr. Swain says his department sees just one sleep related death each year that they can definitively blame on alcohol.

\"What this bill would do is criminalize behavior that's not causing infants to die,\" Dr. Swain said.  \"So you're making people guilty for something they're not actually guilty of.\"

The bottom line is we have the tools to fight this problem, but they aren't giving us the results needed to make the issue go away.

\"If someone would have told me, you know, this can happen even in the safest co-sleeping environment, I think maybe I would have rethought it.\"

The Milwaukee Health Department is going back to the drawing board. In fact, it's now targeting dads, to help them help their spouses. The new program is called \"Direct Assistance for Dads\".  The Health Department also is increasing medicaid-funded in-home visits. Meanwhile, Representative Kerkman hopes her bill goes before the full assembly this spring.  We'll see if new programs will get the number of co-sleeping deaths closer to zero.