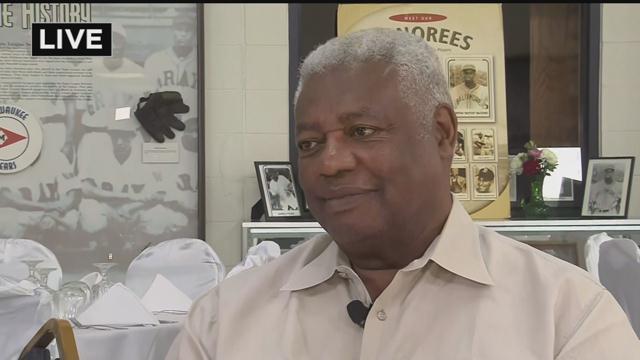 Oscar Robertson is in town for Friday's annual Fellowship Open Golf Tournament which has raised tens of thousands of dollars over the years to send young men and women from Milwaukee's inner city to college.

Before he receives the Legends Award he was at the Boys and Girls Club on Mother Daniels Way to donate his honorarium to the group that he believes gives children the guidance and support they need especially in times of renewed racial tension.

"Sometimes they go under the radar," Robertson said. "It's wonderful that they're here and the influence they have."

The Big O as he's called knows well the sting of racism, growing up in the south and playing professional basketball at a time when in many cities he was forced to stay at separate locations from the team hotel.

He says he wasn't surprised to see the racial tension and violence that re-ignited across the country and just last weekend in Milwaukee following a fatal officer involved shooting.

""It's unfortunate that it happened. It happened before me. It will happen again. America is a volatile place. These things are gonna happen.
Police have a difficult job, but sometimes the things they do are questionable and people want answers."

Robertson says he doesn't feel optimistic or pessimistic about the future in police and community relations or race relations.

"There's gonna be ups and down and hope that median line goes up."

Robertson forever changed the game of basketball both on the court and in the courtroom.

Voted “Player of the Century” by the National Association of Basketball Coaches, and holder of a Lifetime Achievement Award from the National Basketball Association (NBA), he has also distinguished himself as a social activist, a labor leader, an international ambassador for the game of basketball, a business owner, a mentor and teacher, and a philanthropist.

As president of the National Basketball Players Association, Robertson was the first African-American president of any national sports or entertainment labor union. His class-action, anti-trust lawsuit vs. the NBA resulted in a court settlement known as the "Oscar Robertson Rule," which led to NBA players becoming the first professional athletes to achieve free agency.

Robertson was also one of five co-founders of the NBA Retired Players Association and served as its first president. One of the nation’s leading small business owners, Robertson is CEO of companies in the areas of specialty chemicals, document management and staffing services, and media production. He holds an honorary Doctorate of Humane Letters from the University of Cincinnati and a Lifetime Achievement Award for entrepreneurship from the University of Cincinnati College of Business Entrepreneurship Center.

He had an honest and frank discussion with CBS 58's Michele McCormack on the CBS 58 News at Noon.

That interview is attached to this story.