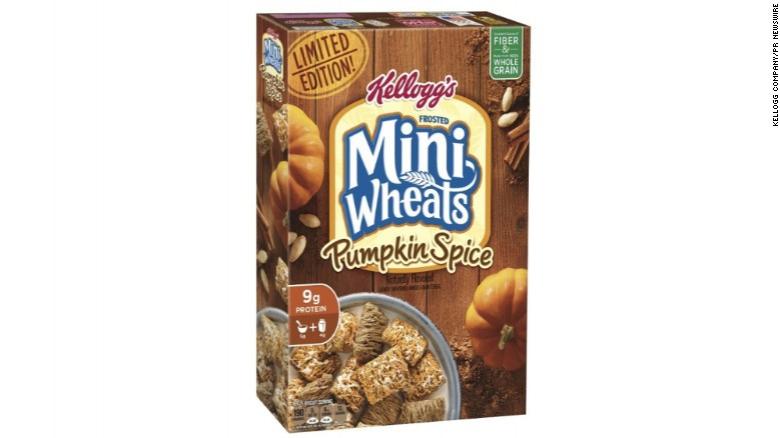 Kellogg's is the latest to jump on the bandwagon started by Starbucks and its pumpkin spice latte way back in 2003, splashing its popular Mini-Wheats cereal with pumpkin spice flavorings.

The cereal adds \"sweet cinnamon, nutmeg, allspice and ginger\" to the recipe for regular Mini-Wheats.

And that's not all Kellogg's has up its sleeves. It's bringing back pumpkin spice Pop-Tarts and debuting pumpkin spice Keebler Fudge Stripes cookies.

\"My smartest purchase for this week is Pumpkin Spice Mini Wheats. I have no apologies, and certainly no regrets,\" Twitter user @April_M_Wilson wrote Thursday.

Cereal is just the spicy tip of the pumpkin spice juggernaut, a trend that's inspired dozens of tasty treats, and not a few head-scratchers -- pumpkin spice Pringles, anyone?

From there, things get strange.

Real. Real. And real -- unlike some of the notable pumpkin spice parodies from recent years, such as condoms or Four Loko.

The trend has also earned send-ups by \"Saturday Night Live\" and other comedy outlets.

And like everything else, pumpkin spice stuff has its fans and detractors on social media.

The Drink That Started It All, the Starbucks pumpkin spice latte, has more than 85,000 followers on Twitter.

Patience. The drink returns September 8 to extend its run of more than 200 million cups sold. New this year -- real pumpkin and no more caramel coloring.

Others are so ready for the trend to fizzle out.

Nielsen Research reported retail offerings of pumpkin-based products grew 18.8% in 2012, the latest numbers available on its website. Frozen goods topped the list, followed by ciders, breads, coffee creamers and -- ready for it? -- yogurt.

And in restaurants, pumpkiny offerings on the regular menu -- everything from drinks to appetizers to pizzas to dessert -- are up 188% since 2011, with limited time offerings up by 29%, according to Datassential Menu Trends.

\"If we look at pumpkin spice specifically, the sample size is smaller, but it is growing at a rate even faster than overall pumpkin,\" spokeswoman Claire Conaghan told CNN.