The 2019 Grammy Awards: Winners and highlights 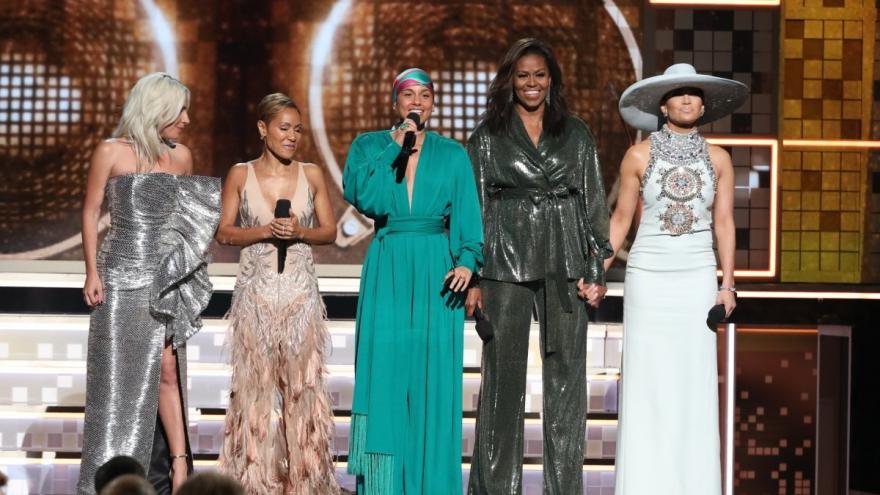 (CBSNews) -- The biggest stars in music hit the stage for the 61st Annual Grammy Awards on Sunday. Female performers dominated the ceremony and some made history. Country singer Kacey Musgraves took the night's biggest honor, album of the year.

Kacey Musgrave won album of the year for "Golden Hour." The country singer said she never dreamed that her album would be met with "such love, such warmth, such positivity, it seriously means the world to me."

"I love country music with everything that I am," she said.

Musgraves thanked her husband Rustin and her younger sister for shooting and designing all of her album covers.

Jennifer Lopez brought flare from her Vegas performances in to her Motown tribute Sunday. She sang "The Best Things in Life Are Free," "Do You Love Me" and "Please Mr. Postman." Smokey Robinson joined her onstage to perform "My Girl." She was also joined onstage by Alicia Keys and Ne-Yo.

However, some fans criticized Lopez for taking on the tribute for Motown, a record label founded in 1959 that helped black musicians break into mainstream American music.

After performing her latest single "Money," rapper Cardi B solidified a breakout year by becoming the first solo woman to win best rap album for her debut "Invasion of Privacy."

She thanked her husband, Migos rapper Offset and their daughter Kulture. She also admitted how nervous she was during the speech.

"I'm sorry. I just, oh the nerves are so bad. Maybe I need to start smoking weed," she joked. She then explained what it was like learning she was pregnant before her album was finished.

"Where I want to begin is by saying how honored I am to be nominated alongside so many incredible female artists this year because I guess this year we've really stepped up," Dua Lipa said Sunday.

Taking the Grammy stage for the first time, Travis Scott performed "Mile High" with Jame Blake and Earth Wind and Fire. The Houston rapper then turned up the energy by inviting fans on stage to perform "No Bystanders" off his critically acclaimed album "Astroworld."

H.E.R. won the award for best R&B album but was quick to remind the audience that her self-titled work was an EP (extended play).

"The first thing I want to say is this is unbelievable. Second, this is not even an album, it's an EP," she said before inviting her team up to the stage.

"I'm speechless right now, I'm holding back tears. But I really want to say thank you so much to God, first and foremost and my parents who are in the building right now and my wonderful sister, mom, dad, this is for all the sacrifices that you made for me."

Lady Gaga and Mark Ronson's performance was anything but “Shallow”

After winning the award for best pop duo/group performance, Lady Gaga took the stage with Mark Ronson to give a stellar performance of "Shallow" from the film "A Star is Born."

Lady Gaga has won three of her five Grammy nominations, including best pop solo performance for "Joanne (Where Do You Think You're Goin'?).

As he accepted the award for best rap song, Drake took a slight dig at the ceremony by saying artists shouldn't measure success by the awards they win.

"I want to take this opportunity while I'm up here to talk to all the kids watching, aspiring to do music. All my peers that make music from their heart, that do things pure and tell the truth, I wanna let you know, we play in an opinion-based sport, not a factual-based sport. It's not the NBA where at the end of the year, you're holding a trophy because you made the right decisions or won games."

Over the years, critics and artists have slammed the Grammys for excluding black artists from its biggest categories. Drake said voters may not understand where hip-hop artists are coming from.

"This is a business where sometimes it's up to a bunch of people that might not understand what a mixed-race kid from Canada has to say or a fly Spanish girl from New York, or a brother from Houston," he continued.

"The point is, you've already won if you have people who are singing your songs word for word. If you are a hero in your hometown, if there's people who have regular jobs who are coming out in the rain, in the snow, spending their hard-earned money to buy tickets to come to your shows, you don't need this right here," he said of his Grammy trophy. "I promise you, you already won."

In her opening, Alicia Keys brought out Michelle Obama, Lady Gaga, Jennifer Lopez and Jada Pinkett Smith. The stars shared stories of how music led them to success, and the former first lady could hardly get a word in without the crowd erupting.

"From the Motown records I wore out on the South Side (of Chicago) to the 'Who run the world' songs that fueled me through this last decade, music has always helped me tell my story," Obama said on stage.

"I know that's true for everybody here. Whether we like country or rap or rock, music helps us share ourselves, our dignity and sorrows, our hopes and joys. It allows us to hear one another, to invite each other in. Music shows us that all of it matters, every story within every voice, every note within every song."