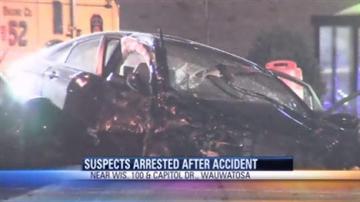 MILWAUKEE -- Two teenagers believed to be responsible for several area robberies and auto thefts are in jail after leading police on a chase Wednesday night.

Milwaukee police say the 15 and 16-year-old boys robbed and beat another 16-year-old near 61st and Leon Terrace just after 8 p.m. Wednesday.

Officers spotted the pair driving a stolen car near 72nd and Fiebrantz about 45 minutes later.

When officers tried to stop the car, the driver sped off.

He led police on a brief chase that ended near Highway 100 and Capitol after he went through a red light and crashed into a minivan.

Both suspects were arrested.

The minivan's driver and passenger were taken to the hospital with non-life threatening injuries.

Police say the department is working with neighboring jurisdictions to see if the teens are also connected to recent crimes in their communities.