Teens Fall Through Ice While Taking Pictures on Frozen Pond 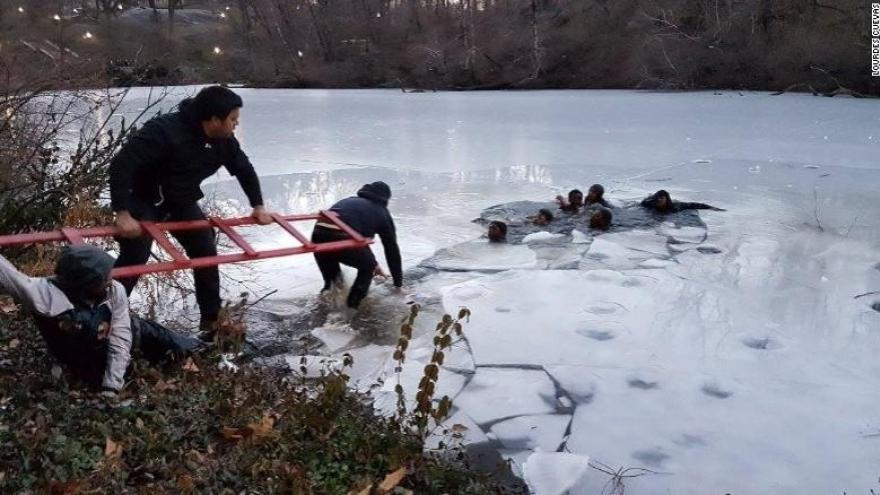 (CNN) — Tourist Lourdes Cuevas and her family were taking in the beauty of one of New York City's iconic spots when they spotted some teens balancing on an icy pond.

The kids were "playing" and "sliding" on the patch of ice in Central Park when they "decided to take a selfie," she said. Cuevas and her family decided to do the same.

Suddenly the ice cracked and the teens plunged into the frigid water -- a terrifying incident Cuevas captured on video.

"My daughter and husband ... ran for ladders and started pulling people out," she said.

When the fire department responded, most of the teens had come out of the water, firefighter Eddie Long said.

Seven patients were taken to hospitals in serious condition, Long said. They were treated for hypothermia but all were expected to survive, he said. He didn't know if all of them were teens or whether the patients included good Samaritans who jumped in.

The economics site Pricenomics found as of May 2016 the most dangerous places to take a self-portrait appeared to be high places or in water.

Researchers gathered data over three years by combing through news reports indicating a death was "precipitated by a selfie" or that a person had died while attempting to take a photo of themselves.

From 2014 onward they found 16 people died from falling off a cliff or a tall building, while 14 drowned.

Luckily, everyone in this polar plunge survived.