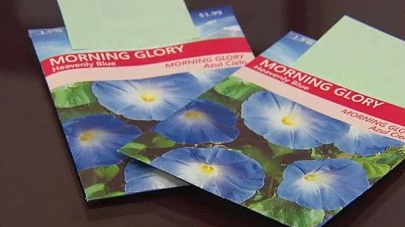 plant seeds in order to get high from their hallucinogenic properties.

first heard of the problem when some teens who had eaten the seeds in neighboring Somerset got sick and were hospitalized.

Now, the seeds have been found in the Seekonk School District.

“We as human beings have a tendency to come up with different ways to become impaired, or however you want to describe it,” said Mace.

The seeds have a hallucinogenic effect because they contain LSA – which is similar to LSD.

“Here we have a natural product that’s intended for ornamental purposes, and somehow, someone figured out that it could cause a hallucinogenic effect,” said Mace.

"Parents should know if their children are into planting flowers or not, so if they see these things in the household

, the radar should be on, the red flag should go up.”

A memo from Seekonk Schools Superintendent Arlene Bosco about the seeds was posted on the Seekonk Police Department Facebook page Tuesday night. She said the Somerset teens were not seriously hurt.

Bosco said the seeds could cause “auditory and visual hallucinations, spatial and temporal distortion, introspection, and side effects such as nausea and vomiting.”

The post said that the Somerset Home Depot had agreed to remove the seeds from their shelves for the time being, but that many other stores may sell the seeds.