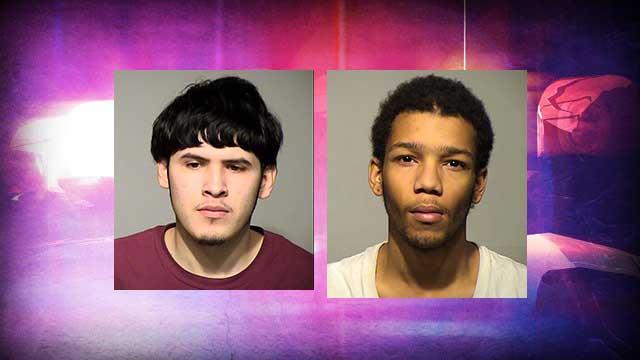 A group of teens allegedly known as the Cut Throat Mob are charged with stealing 12 mostly high end vehicles.

None of the vehicles were car jacked, all the vehicles’ owners had left keys to the cars in the cars.

One of the suspects was placed on supervision for a year for driving a stolen vehicle in May of 2016.

During an interrogation, one of the suspects was asked if he had broken into over 200 vehicles already. The suspect responded, “probably.” The same suspect also told police they “always go downtown to steal license plates, so they can put them on vehicles they steal.”

On one occasion one of the suspects told police he was involved with the burning one of a stolen vehicle.

On another occasion, the suspects crashed a stolen vehicle after attempting to flee from police following trying to steal another vehicle at Hotel Metro. In the vehicle that crashed, officers recovered magazine cartidges, cell phones, stolen license plates, and a brown bag stolen from another car in downtown Milwaukee.

Two of the suspects allegedly admitted to police taking the cars and spoke of other accomplices.

Details of the thefts were included in a 28 page criminal complaint:

In September, Jesus Lazaro allegedly stole a woman’s vehicle in Bay View after she returned from the grocery store and parked her vehicle. She left her purse with keyfob in the car, and when she came back to get it the car was gone. Fourteen days later her car was found with another car’s stolen plates on it. The car was found on South 8th Street. In November, the woman’s vehicle was stolen again from her home. Lazaro allegedly admitted to police taking the car.

In October, Jesus Lazaro allegedly involved in stealing a Hyundai from a parking lot on S. 27th Street. The woman’s key fob was in the car. A palm print for another alleged member of the CT Mob was found on the passenger window.  Lazaro allegedly told police he drove the vehicle the day after it was stolen.

The same day the Elantra was stolen, Lazaro allegedly was involved in stealing items from a vehicle in Bay View. These items included a bank card, iPod Touch  and two municipal court identification cards.  Lazaro’s fingerprints were discovered underneath the driver’s side door handle.

A few days later, Lazaro was allegedly seen looking into the passenger side of a vehicle. When an officer tried to stop him, Lazaro got into a getaway vehicle that hit the squad’s car passenger side.  Lazaro allegedly admitted to this act.

A few days after this Lazaro allegedly was involved in stealing another vehicle from S. Oak  Park Court. This vehicle him and his friends allegedly set on fire.

The same day Lazaro allegedly stole a Jeep Grand Cherokee from Brady Street. A second key for starting the vehicle was taken.

The same day, two elderly women attempted to drop off their vehicle at Hotel Metro’s valet. The women witnessed the valet fight with someone over the key fob, and the suspect fled to the Jeep. Prior to fleeing the individual, identified as Giovanni Zurfluh, pointed a semi automatic handgun at one of the women. He allegedly said, “I’ll shoot you bitch if you don’t let him go.” The valet kneed one of the suspects and witnessed the Jeep pull up. Another Hispanic male in the driver’s seat said, “I don’t want to kill anyone, let my friend go.”

The Jeep crashed into a parked vehicle during a vehicle pursuit. In this incident Lazaro said he was in the stolen Jeep with Junior Moreno  and Giovanni Zurflu.

In November, a woman reported that someone smashed the windows on her fiancé’s Audi and stole the spare key fob for her Jetta. This incident happened in the fifth ward. Five days later when the vehicle was recovered the vehicle had extensive damage. Video surveillance at McDonald’s in West Allis showed Moreno retrieve drinks through the drive thru window in the stolen vehicle.

Three days before Thanksgiving, Lazaro and Moreno allegedly stole Toyota Camry down the street from County Clare on the Milwaukee’s East Side.  The vehicle was parked in the Lincoln School of the Art’s parking lot. The victim reported a handgun was in the glove compartment and loaded.  The victim told police there was a spare set of keys in the trunk of the vehicle.

The Saturday after Black Friday, Lazaro fled from police in the Camry.  After the pursuit the vehicle was found in smashed against a cement wall with a smell of marijuana.  Lazaro allegedly admitted to police to taking the vehicle.

The next Monday a Volvo S60 was stolen in Bay View. The vehicle was stolen with the keys in it.

On November 30, Moreno and Lazaro were involved in stealing a unlocked Range Rover on Cherokee Way. Moreno allegedly admitted to being in the stolen vehicle, but said Lazaro was driving.

The same day, Moreno and Lazaro were involved in taking a Porsche Cayanne on North 35th Street. The owner’s brother left the vehicle running while he went into a gas station to pay. He witnessed the vehicle being stolen and followed the vehicle in a friend’s vehicle. He heard gunshots fired in the area of I-94 and Greenfield Avenue and they stopped following the vehicle.

According to the criminal complaint, Jesus Lazaro, Junior Moreno and Giovanni Zurfluh were members of this group.

Lazaro was charged with three counts of theft, obstructing an officer, attempting to steal a vehicle, fleeing police, and six counts of operating a motor vehicle without owner’s consent.

Zurfluh was charged with operating a motor vehicle without the owner’s consent, attempting to steal a vehicle, and endangering the safety by use of weapon.