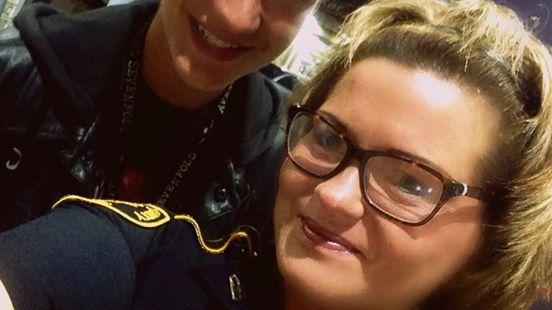 (CNN)When a Texas teenager provided \"backup\" for a law officer pumping gas alone in the rain near Houston, she snapped a selfie of the two of them. It has gone viral.

Harris County Deputy Constable Tommi Jones Kelley posted the photo this week to Facebook and wrote, \"this teenager I've never met before is standing right behind me & says, 'ma'am, do u mind if I stand here behind you while u get ur gas?'\"

She asked him why. The young man, whom she identified as Mckinley Zoellner, answered \"to make sure You stay safe!\" Kelley wrote. The post had been shared 181,000 times by early Sunday.The gesture delighted Kelley, particularly in light of the killing of a sheriff's deputy at a gas station a little over a week ago.

Fellow Deputy Darren Goforth was shot dead on August 28 while refueling his patrol car. The 10-year veteran was in uniform at the time. Officials described it as an \"execution-style\" attack.

Authorities say Shannon Miles, 30, came up behind him and fired into his back, then stood over him and fired more shots. Miles is charged with capital murder. Goforth was buried Friday with full honors.

Even after Kelley pumped the gas, Zoellner was still standing there in the rain, Kelley wrote. Then he got into the car with his mother. \"I told her she has an amazing son,\" Kelley wrote. \"...she said he wanted to make sure no one hurt me.\"

Though she was armed with her service handgun, Kelley wrote, Zoellner \"stood there empty handed, but he for sure had my '6' while my back was turned.\" In police and military jargon, \"got your six\" means got your back, referring to it as the six o'clock position.

\"With all the terror going on nationwide, this reassured me there are still some pretty awesome individuals out there!\" she said.