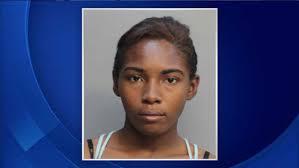 (CBSNews) MIAMI -- A Florida teenager accused of taking part in the brutal machete murder of a schoolmate is seen crying and screaming at police in an interrogation video released by the Miami-Dade State Attorney’s Office and obtained by the Miami Herald.

Prosecutors say the group spent two weeks planning Guardado’s death, including digging a shallow grave in the woods near their school days before he was killed. In June 2015, the group allegedly lured Guardado into the woods, where police say Arbelo ambushed him with a machete as the others watched. The suspects and victim were students at Homestead Job Corps in Miami, a live-in school and vocational training program for at-risk students run by the U.S. Department of Labor.

In the interrogation video after her arrest, a handcuffed Strickland is seen demanding to be let free, screaming at a detective and crying hysterically, repeatedly saying “I have no involvement” and asking for her father.

“I did not kill that boy, I promise!” Strickland is heard yelling at a detective.

A detective accuses her of pushing him before the interview, which she denies. Strickland reportedly later removed screws from from an electrical outlet and used them to try and pick handcuffs and scratch words into the table, allegedly writing, “MPD go to hell!”

Strickland reportedly invoked her right to a lawyer and was transported to jail.

Strickland is reportedly the girlfriend of alleged ringleader Kaheem Arbelo. According to the Miami Herald, witnesses told police Strickland “complained that she had missed the first series of machete strikes because she had walked away for a few minutes to urinate in the woods,” her arrest report says.

After the killing, the group allegedly buried Guardado and to hide evidence, burned belongings as well as their own clothes, according to police. Strickland has pleaded not guilty in the case.

Investigators say all but Strickland and Arbelo went back to campus, and the duo allegedly stayed behind to have sex near where the murder took place.

Guardado’s remains were discovered four days later by family members who were searching for him.

Police say the killing was over a debt owed to Arbelo, a suspected drug dealer. All five are awaiting trial on first-degree murder charges and face the possibility of the death penalty.