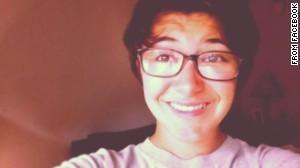 Maren Sanchez was described by her family as \"a bright light full of hopes and dreams.\" She died Friday after being slashed in her neck, chest and face.

He's being held at a local medical facility and a murder charge is pending, officials said. He'll be arraigned on this charge next Monday in a juvenile court in New Haven, though police note that courts will decide later whether he will be tried as an adult.

The incident began around 7 a.m. in a stairwell at the school, and was witnessed in part by at least one school staff member.

Sanchez, a junior, suffered \"multiple lacerations\" and investigators \"recovered a knife at the crime scene,\" police said. The Connecticut Chief Medical Examiner's Office has yet to officially determine a cause of death.

Addressing reporters on Friday, the police chief didn't provide a motive but said investigators are looking into rumors a boy was angry because Sanchez had declined to go to the prom with him.

The prom, scheduled for Friday night, has been postponed. All students were sent home, and Milford Public Schools Superintendent Elizabeth Feser said counseling services will be available to them throughout the weekend.

The slain girl's cousin, Edward Kovac, read a statement from her family lamenting what they called an \"unprovoked attack\" that ended the life of a young woman who had \"her future at her fingertips.\"

\"Maren should be celebrating at her prom this evening, with her friends and classmates,\" the family said, via Kovac. \"Instead, we are mourning her death, and we are trying as a community to understand this senseless loss of life.\"

The family statement recalled other cases of school violence, saying \"we can never forget the lessons ... from this\" and other incidents. One of those incidents happened about 22 miles away, in December 2012 in Newtown, when a lone gunman shot his mother to death, then went to Sandy Hook Elementary School and killed 26 people, including 20 children, before taking his own life.

\"We need to ensure that more young children are protected from violent attacks at school,\" the family said.