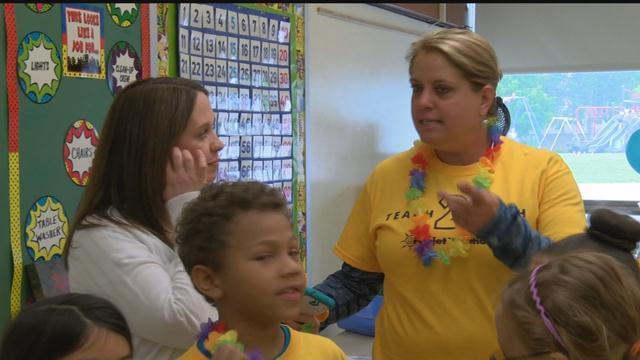 It wasn't just any school day for a second grade teacher in South Milwaukee.

Funjet Vacations to announced she was a winner of the Teach2Beach giveaway!

Rachel Swick from Lakeview Elementary School was one of more than a thousand teachers nominated for the vacation.

The contest was staged in honor of teacher appreciation week.

She was nominated by a grateful mother who says Swick helped her son with his school work and helped him socialize with his classmates as well.

“My son has always struggled with learning but she never gave up on him. She spent countless hours finding ways to help him with not only learn, but socialize,” said Kara Wolverton, who has a child in Ms. Swick’s class and submitted the nomination. “As a parent I thought it was me who was failing. I had doctors tell me was autistic and had attention issues.”

Wolverton added that Ms. Swick never gave up. “She saw past that and kept working with him and pushing him, knowing he was capable of more. Turns out, he is not autistic and didn't not have attention issues.”

"I thought there's gonna be thousands and thousands of entries.  Probably won't go anywhere.  But then when they called me to tell me that she was selected, it instantly brought tears to my eyes and then I thought, oh my God, I hope she's not mad,” said Wollerton.

Rachel Swick was planning to take a little vacation up north this summer.   Those plans have now changed.