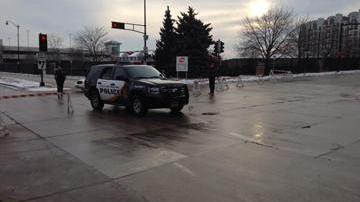 RACINE  -- The Racine Police Department says it was actively involved in a tactical situation in the area of Harborview and Gas Light drives from Wednesday night until Thursday morning.

It happened in an apartment/condo complex along Gaslight Drive.

A Racine woman in her 30's was taken to Wheaton Franciscan Hospital after the incident.  A man in his 40's fled into his home.  Police knew he had access to weapons. That's why they brought in multiple units.

\"We heard loudspeakers from a police officer announcing someone to get out of their garage with their hands up,\" Nona Kaiser said.

She was kept up most of the night by the situation.

\"When I woke up this morning all I could see is continued police activity around the building.\"

Employees at a nearby Radisson Hotel tell us police ordered them to go on lock down at about 5:30 Thursday morning. The employee said the incident did not start inside of the hotel and that no one is allowed to enter or exit the building, including workers showing up at the hotel to start their shift.

\"Police told me when I pulled up there was an armed man around the area,\" Cinthya Ramirez, who works at the Radisson, said.  \"They just wanted to make sure it was not in side the hotel.\"

Police sent out an update at about 8 a.m. saying that a secure perimeter has been established and SWAT and Crisis Negotiators are on scene to assist with the situation.

Police arrested the man without incident.  They cleared most of the scene by 9:00 am.

Racine police are asking anyone with information about this incident to call their department at (262) 635-7722.