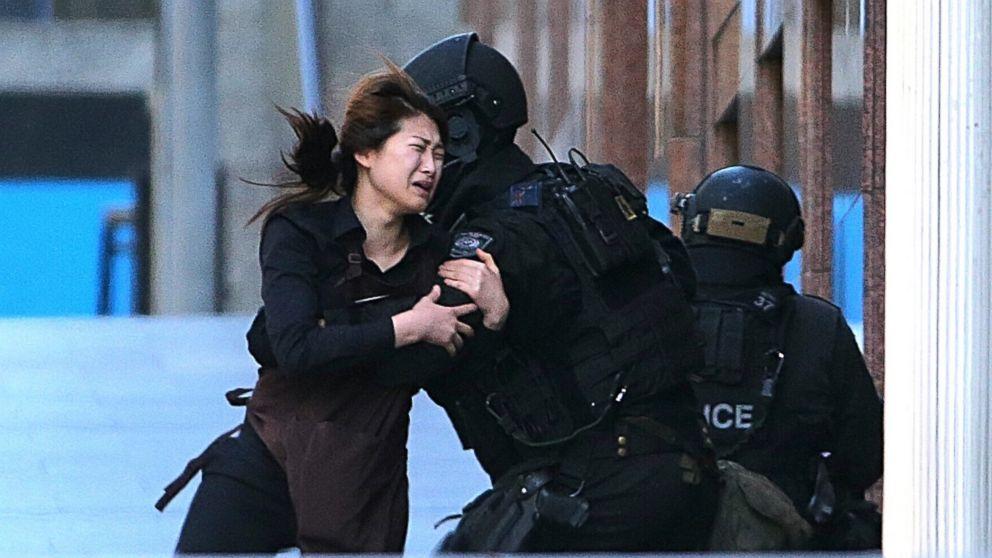 A gunman is dead after holding hostages in a Sydney cafe for 16 hours. Police finally rushed the building. Inside they found two hostages dead. Several others and at least one police officer also injured.

The hostage taker has been identified as Haron Monis, a Muslim Cleric with a lengthy rap sheet.

The reported demands emerged after five hostages managed to flee the building in the early hours of the takeover.

The gunman's requests were made through hostages who contacted several media organizations, CNN affiliate Sky News Australia reported. Police said they were aware of the reports but declined to confirm what demands had been made.

Amid the crisis, hundreds of police officers, some of them armed with sniper rifles, shut down a usually bustling area in Australia's most populous city.

Chilling images from local media showed people, believed to be hostages, with their hands pressed against the glass of the Lindt Chocolate Cafe in Sydney's central business district.

Footage showed them holding up a black flag with Arabic writing on it that reads: \"There is no God but God and Mohammed is the prophet of God.\" That flag was different from the one used by the terrorist group ISIS.

After hours of tension and uncertainty, three people were seen sprinting out of the cafe and into a group of police officers.

Later, two women dashed out of the cafe and along the street to the waiting police.

\"Those people are now being assessed to ensure that their health is OK and then police will also speak to them,\" said New South Wales Police Deputy Commissioner Catherine Burn. She said police negotiators are in touch with the hostage taker.

Chris Reason, a correspondent for CNN affiliate Seven Network, was allowed to return to the broadcaster's evacuated offices near the cafe.

He said he could see the gunman pacing past the windows, describing him as unshaven, wearing a white shirt and black cap and carrying a shotgun.

Following the escape of some of the hostages, Reason said the gunman became \"extremely agitated\" when he realized what had happened and \"started screaming orders\" at the remaining hostages.

After night fell in Sydney, Reason reported that the lights had been turned off in the cafe, plunging it into \"complete darkness.\"

Authorities said many of the details about the situation remained unclear, notably the motivations of the hostage taker. Police repeatedly referred to only one hostage taker but said they hadn't ruled out the possibility that others were involved.

\"It is profoundly shocking that innocent people should be held hostage by an armed person claiming political motivation,\" Prime Minister Abbott said. He had earlier told reporters that officials didn't know if the hostage taking was politically motivated.

The writing on the flag in the window stoked fears that the crisis in Sydney could be linked to Islamic extremists. Australia, which is part of the international coalition fighting ISIS in the Middle East, said in September that it had foiled a plot by Islamic militants to carry out a public execution.

Commissioner ScAscriptionaid it wasn't yet clear whether the situation at the cafe was a terrorist event, but that police are on \"a footing that would be consistent with a terrorist alert.\"

Police said they are also monitoring social media amid reports that some of the hostages were posting updates from inside the cafe.

Muslim leaders in Australia condemned the hostage taking, calling it \"a criminal act.\"

\"Such actions are denounced in part and in whole in Islam,\" the Grand Mufti of Australia and the Australian National Imams Council said in a statement on Facebook.

'That could be me'

The hostages appeared to include staff and customers who were taken captive as commuters were heading to work on Monday morning in the Martin Place area, where big institutions like the Reserve Bank of Australia are located.

One employee of the cafe who was due to work a later shift Monday said she was deeply shaken when she saw footage of some of her colleagues pressed against the window.

\"That could be me, right there, standing at that window, standing there, holding that flag, being told not to move,\" Kathryn Chee, 25, told the Australian Broadcasting Corporation. \"It's just horrifying.\"

Chris Kenny, an editor at The Australian newspaper, said he was at the cafe Monday morning. He left shortly before the siege started.

\"As police quickly swarmed and cleared the area, I turned to see a man against the window, facing out with his hands raised,\" he wrote in his account of the incident. \"At first I was relieved thinking this was the gunman responding to police -- but soon the awful realization the customers were being forced against the windows.\"

Before some of the hostages fled, Seven Network reported that at least 13 people were being held at the cafe, but police declined to say how many were in there, citing operational reasons. Burn said it was fewer than 30.

Police barricaded off streets and evacuated buildings near the cafe, bringing an eerie quiet to a district typically buzzing with pedestrians and vehicles.

The Martin Place train station was shut down, according to police. They urged people to stay away from the area, but some local office workers gathered at the scene to try to find out what was going on.

The buildings evacuated included the U.S. Consulate General, spokeswoman Alicia Edwards said. All personnel have been accounted for, although it's not known whether there are any U.S. citizens among the hostages. U.S. President Barack Obama has been briefed on the situation.

The company that runs the cafe, Lindt Chocolate Cafe Australia, said it was \"deeply concerned over this serious incident and our thoughts and prayers are with the staff and customers involved and all their friends and families.\"