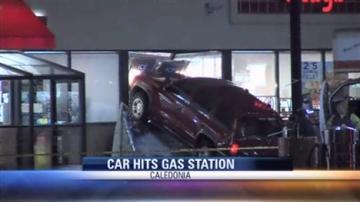 CALEDONIA -- Authorities were on the scene of a crash in Racine County where an SUV was pushed into a gas station.

It happened around 9:45 p.m. Tuesday at the Pilot Gas Station, connected to an Arby's restaurant on Northwestern Avenue.

Officials say a box truck hit an SUV that was parked in front of the store, pushing the SUV into the building.

One person inside the store was injured and four people were taken to the hospital with non-life threatening injuries.