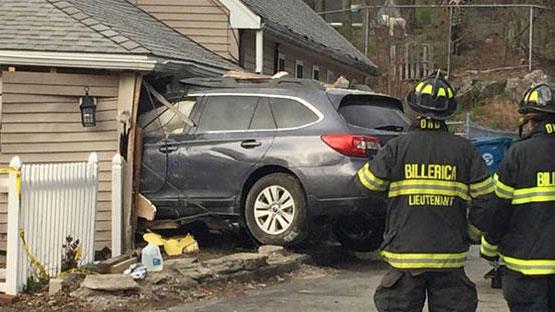 BILLERICA, Mass. (CBS NEWS)-- Massachusetts police say a driver having a medical episode struck several cars and crashed through the wall of a day care center, pinning a toddler beneath the vehicle.

He says it then crashed into A Brighter Rainbow Learning Center, landing in the main child care area. Four children were inside and at least three others were in an outside play area.

"I couldn't believe what I just saw," witness Kathleen Jones told CBS Boston. "There was dust, and there was broken glass and people screaming."

A 2-year-old boy was taken to the hospital. Frost says the child's injuries aren't life threatening. Witnesses say he had a gash on his head. Two other children were treated at the scene.

The driver also was taken to the hospital with non-life-threatening injuries.

A father's concealed weapon went off when he was play-wrestling with his toddler, police say. Both were shot in the head