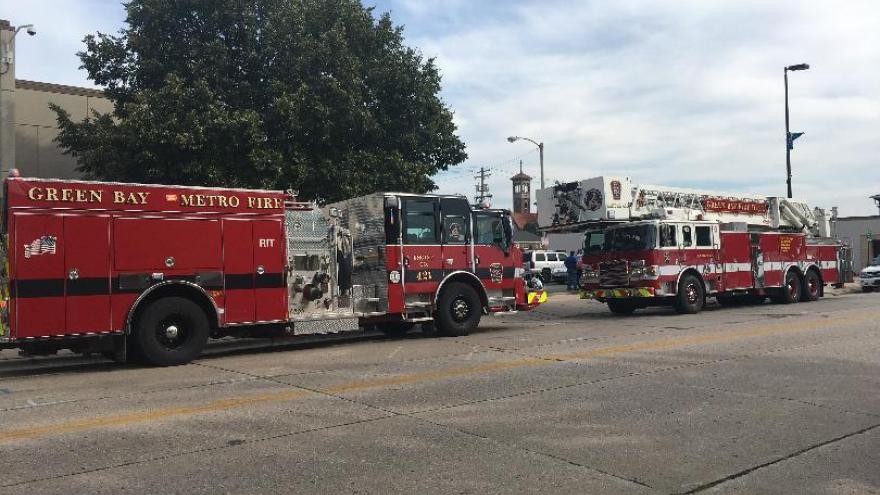 GREEN BAY, Wis. (CNN VIA WBAY) A police department in Wisconsin has received a suspicious package one day after two Green Bay Police Department employees were sickened by an unknown substance in a piece of mail.

Green Bay Police tell Action 2 News that the other department received the package Tuesday, but it was not opened. That's thanks to Green Bay Police alerting other law enforcement agencies in the state.

Police would not say which department received the package Tuesday. The FBI is investigating.

Meanwhile, Green Bay Police, the FBI, and U.S. Postal Inspectors continue to trace the origin of the package that arrived at the department's headquarters in Green Bay Monday.

Green Bay Police Chief Andrew Smith tells Action 2 News that the package was mailed from within the United States, but it did not originate in Wisconsin.

On Monday, Capt. Kevin Warych opened a cardboard package and an unknown substance in the piece of mail made him sick. A secretary also became ill.

"The captain that opened it said there was some type of paper in there," Chief Smith says. "So that's being examined by the FBI now."

The captain and the secretary were given the opiate antidote Narcan and taken to a hospital.

Smith's department did not get a good look at what was inside of the package. It's currently in the hands of the FBI.

"We never really examined the internal contents of it. That was taken by the FBI. Once it was dropped on the floor, we didn't open it again," Smith says.

U.S. Postal Inspectors have been working to trace the origin of the package received in Green Bay.

"And we can determine how many days it had been in transit with the United States Postal Service, so they were able to tell when it was first picked up by the post office and when it was delivered. Postal service was great about that," Smith says.

Chief Smith says investigators have not narrowed down a possible motive.

"I can't imagine why someone would send something like that to our police department. We don't really know what was inside of it. And it looks like there was at least some fictitious things on the envelope, so we'll have to do a little more digging before we can come up with some answers," Smith explains.

The Green Bay Police Department receives dozens of magazines, packages, and letters from citizens--some of them disgruntled.

"If there's an unfortunate or unpleasant incident across the country, a lot of times that will affect us here in Green Bay," Smith says. "We'll get some nasty letters and nasty emails if something bad happens in another city. It's a pretty broad brush people paint law enforcement with, unfortunately, sometimes."

Chief Smith says police have been on edge following the deadly violence in Charlottesville, Va.

"We were unnaturally a little bit on edge because we know there's a lot of contentious back and forth here in this country and police departments usually end up getting caught in the middle of it," Smith says.

Meanwhile, Capt. Warych and the secretary have recovered and have returned to work.

"We're going to continue to monitor them for a couple of days because, according to the folks from the FBI and folks in the medical community, if there was something in there and they started to develop flu-like symptoms, that would be a huge concern for us," Smith explained.

Smith and his department are looking into suggestions for safer mail procedures.

"We talked to the postal inspectors and FBI. One of the things in designing our new police station, we're going to look at developing some type of mail room. Maybe with a vent hood that we can open our mail underneath that hood. That way if we open something like this, any substances or anything that happens to be inside the mail will get immediately vented outside the building so we don't have instances like this occurring," Smith says.

"They also recommended maybe even an X-ray machine in the mail room so that if we get a suspicious package, we can do a quick X-ray of it, see if there's something else inside of there. And then we can either render it safe with the bomb squad or go ahead and open it if it seems like it's OK."

Action 2 News will continue to update this developing story.