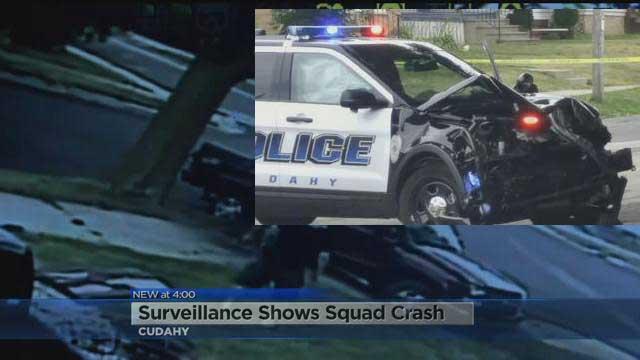 A Cudahy Police squad was involved in an accident on Friday (August 12) at the intersection of Kirkwood Avenue and Munkwitz.

The police officer was on his way to a stolen car crash when he impacted a driver.

Around 10:20 a.m. the police department received a report of several suspects abandoning a Dondge van at Kirkwood Ave. and Squire Avenue. The vehicle had been stolen, according to police.

They jumped in another car, which was also stolen, and sped away, police said. There was a second vehicle that was driving recklessly, which had also been stolen. That second vehicle crashed into a light pole near Mallory Ave and Packard.

Six people were taken into custody.

Richard Conti Jr. owns Pinball Savage on the corner of Kirkwood and Munkwitz. He captured the squad car accident in his surveillance video. He said the driver is his friend.

"Oh I was so scared, I was freaking out,” Conti said.”I was like my buddy. I see him hanging out the window and I thought he was dead… the debris flying everywhere. I didn't know what to expect, everything happened at once.”

The police officer and the driver had minor cuts and bruises and weren’t taken to the hospital. The Milwaukee County Sheriff’s Office is investigating the crash.