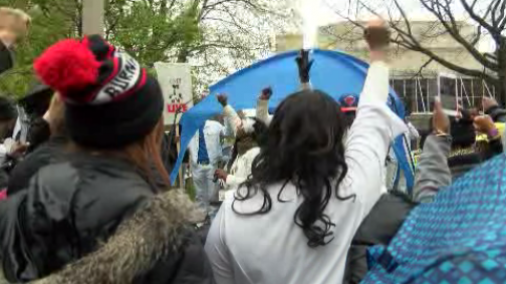 Hamilton's family and the group Coalition for Justice organized the second annual event. It started with a march on Milwaukee's north side and ended at Red Arrow Park where Hamilton died.The event included food, children and art activities, live music, and entertainment. Dontre Day was initiated in 2015 to celebrate Hamilton's life.

There was a 14-minute die-in at this year's event. This represented the number of times Hamilton was shot. A vigil was also held with words from the family and others.

"i think today represents people with common sense coming together saying 'we lost a child, we lost a child.' and i think it's important that everybody pay attention," Safiyah Mirsberger Tolson who attended the Hamilton event said.

Both the Milwaukee county DA and federal prosecutors declined to press criminal charges against Manney. Hamilton's family filed a federal civil rights lawsuit on Wednesday, April 27th. It names Manney and the city of Milwaukee as defendants. The DA's office is not commenting.