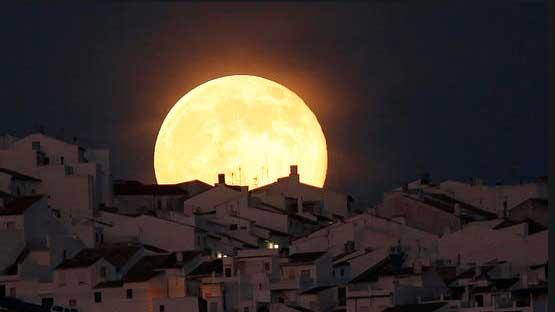 A supermoon occurs when a full moon coincides with the moon's perigree -- the point in the lunar orbit when it's closest to the Earth -- making it appear larger and brighter than normal. The supermoon at the end of this month is expected to be the closest one of 2015, a year that will see six supermoons in all.

A lunar eclipse, meanwhile, happens when the moon passes into alignment with the Earth and sun and briefly falls into Earth's shadow. Space.com explains that during a total lunar eclipse, the moon often turns a reddish color when it's hit by sunlight bent by the Earth's atmosphere, resulting in a phenomenon called a \"blood moon.\"

It's extremely unusual for a supermoon and total lunar eclipse to happen at the same time, as they will at the end of this month. NASA says it has happened only five times since 1900, most recently in 1982. There won't be another one until 2033.

The supermoon lunar eclipse will be visible throughout North and South America the night of September 27, NASA said, while those in Europe and Africa can see it in the early morning hours of September 28. Unlike a solar eclipse, which is dangerous to look at with the naked eye, experts say it's perfectly safe to watch a lunar eclipse.