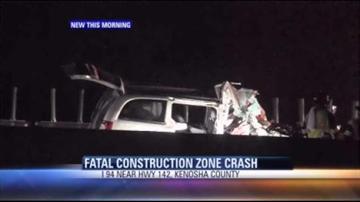 KENOSHA COUNTY -- A 33-year-old Sun Prarie woman is dead following a van vs. semi crash on I-94 in Kenosha County.

Officials say the woman was in the van driven by her 34-year-old husband in a construction zone on southbound I-94 Thursday night.

Traffic had been reduced to one lane, and traffic had stopped due to the merging lanes, officials say.

The van rear-ended the stopped semi.

The driver was taken to Froedtert Hospital by Flight for Life. The woman died of her injuries at the scene.

All lanes of I-94 were closed between Highway 142 and Highway 158 for several hours as crews worked to clear the scene.

Update: On April 27, 34-year-old Bram Dorresteijn died of his injuries at Froedtert Hospital.