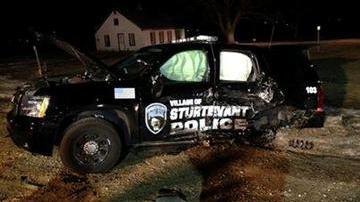 STURTEVANT-- A Sturtevant police officer was injured after his squad car was hit by a suspected drunk driver Friday night.

The officer was driving his marked squad on County Trunk H just north of Braun Road in Sturtevant around 10:30 p.m. Friday when it was hit.

The officer was taken to Wheaton Franciscan All Saints Hospital.

The driver of the striking vehicle was not injured and was arrested for OWI.

The officer was treated for minor injuries and later released.

The crash is still under investigation by the Wisconsin State Patrol.