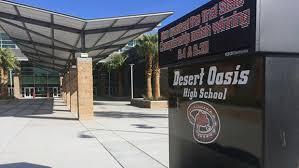 Clark County School District Police captain Ken Young said Thursday the student at Desert Oasis High School was taken into custody Thursday after police uncovered an alleged plot for a mass shooting in the near future or “something more catastrophic” at the school of about 2,350.

Several students who heard about the alleged plot came forward, along with a parent in Arizona who listened in to a Skype conversation their child was having that mentioned the high school, Young said.

Police interviewed the student suspect and went to his home, where they recovered evidence that’s currently being analyzed. Sources told CBS affiliate KLAS that investigators discovered a “manifesto.” Young wouldn’t detail what items were found.

Investigators believe the student was working alone, and didn’t have a “vendetta” against any particular student at the school, Young said. He’s been charged with making terroristic threats.