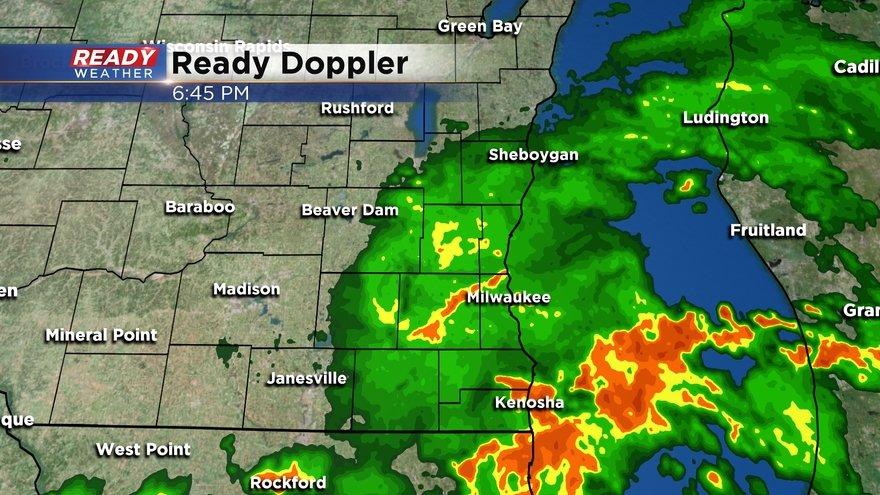 7 pm Update: The severe threat has ended across southeast Wisconsin. There's still a bit of moderate to heavy rain out there moving into Milwaukee county, but there's no lightning associated with it at this time. Majority of this rain will exit the area by 8pm. 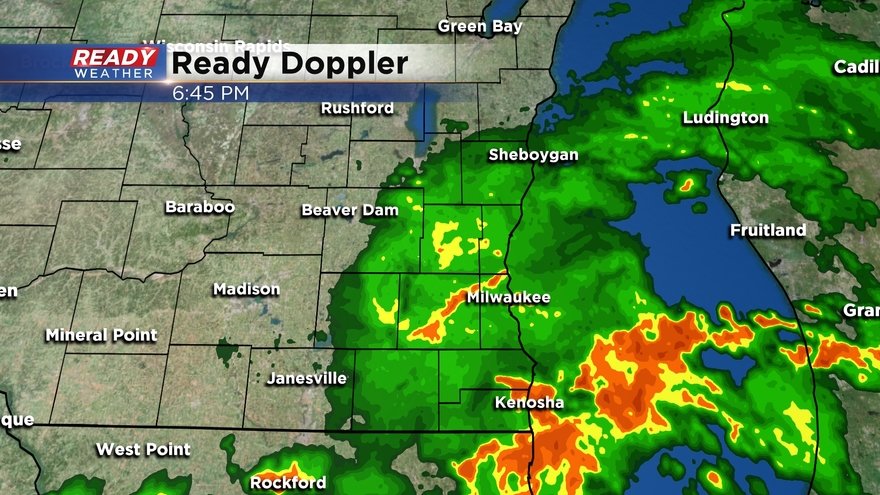 5 pm Update: The line of storms continues to close in on southeast Wisconsin, but the cloud cover we've had throughout the day and the rain ahead of this line of storms is limiting the overall severe threat. That being said, there's currently (as of 5pm) a Severe Thunderstorm Warning for the part of the line moving into Madison for gusty winds. This part of the line our main area of concern over the next 2 hours. 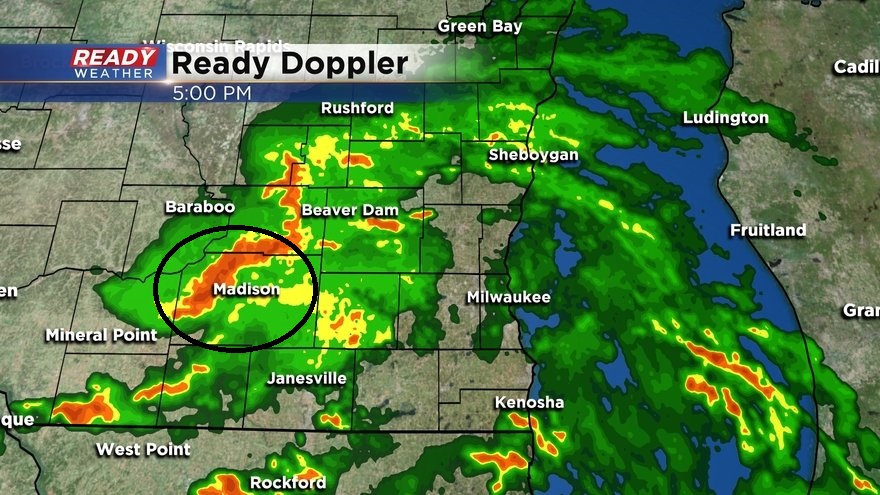 Additional showers and storms and popping up along the WI/IL border. Very heavy rainfall is associated with all of these storms, so we will be watching for localized flooding as well.

3 pm Update: Line of storms in western Wisconsin is currently below severe limits, but it's moving east at 35-40 mph into places that have seen some breaks/thinning in the cloud cover, so they may strengthen as they approach SE Wisconsin. 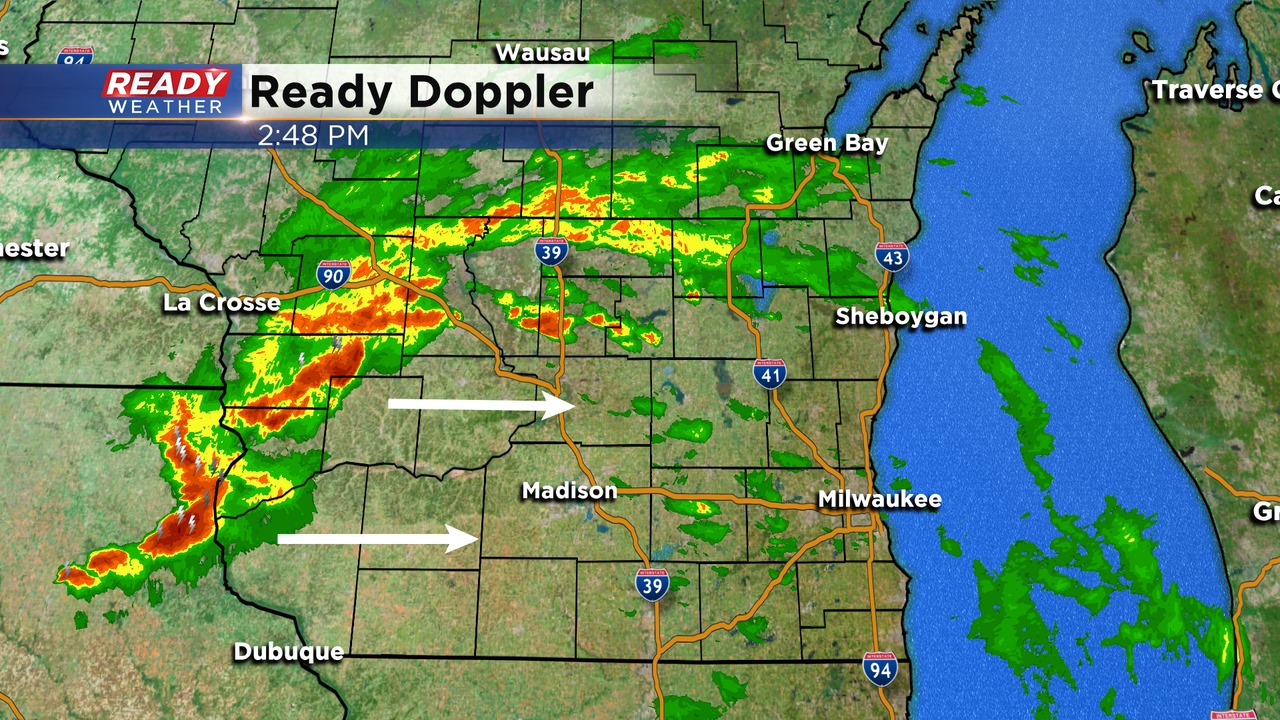 Line of storms could reach western portions of Jefferson and Dodge counties by 5 pm, tracking through most of SE Wisconsin between 6-8 pm. 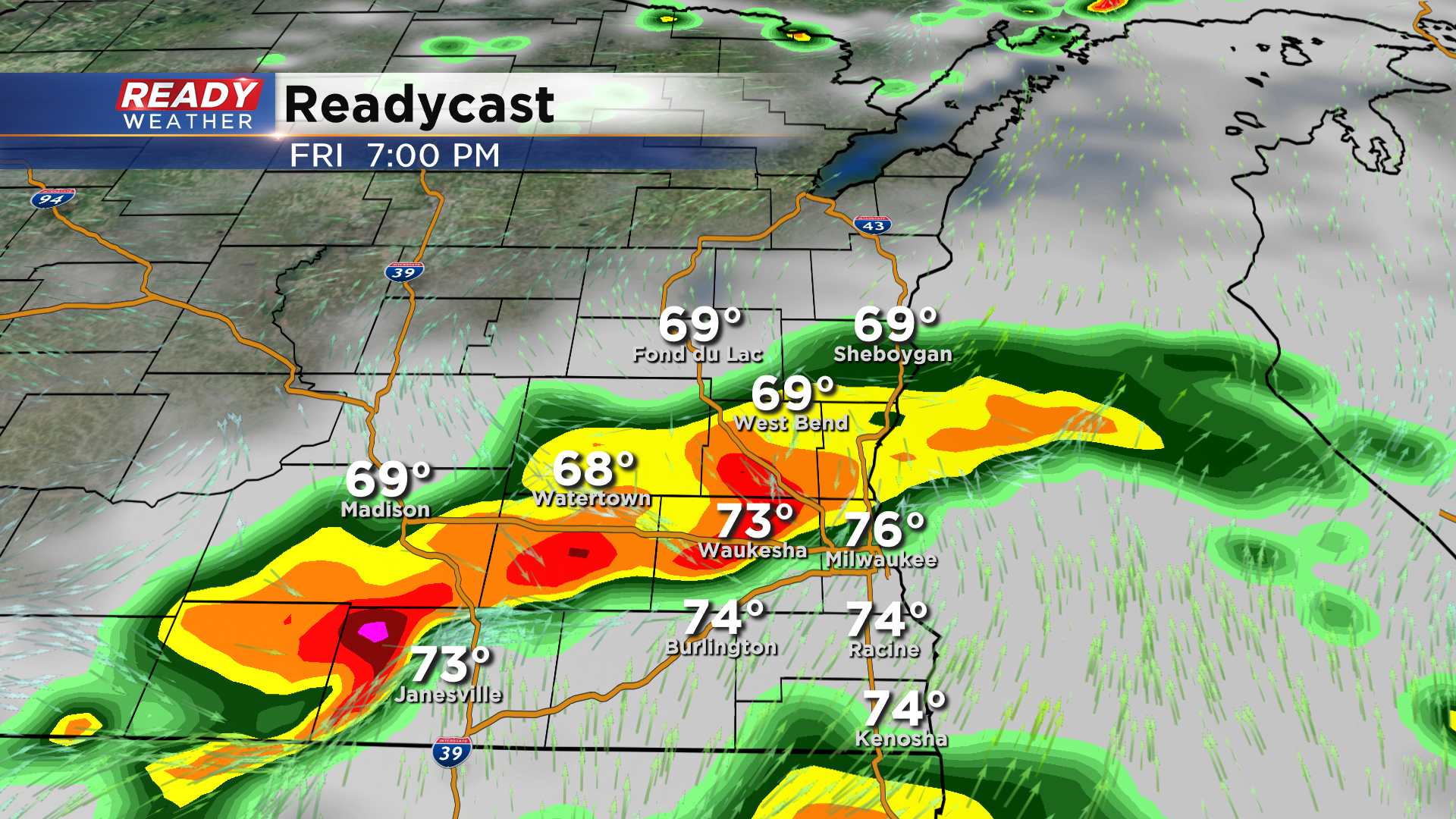 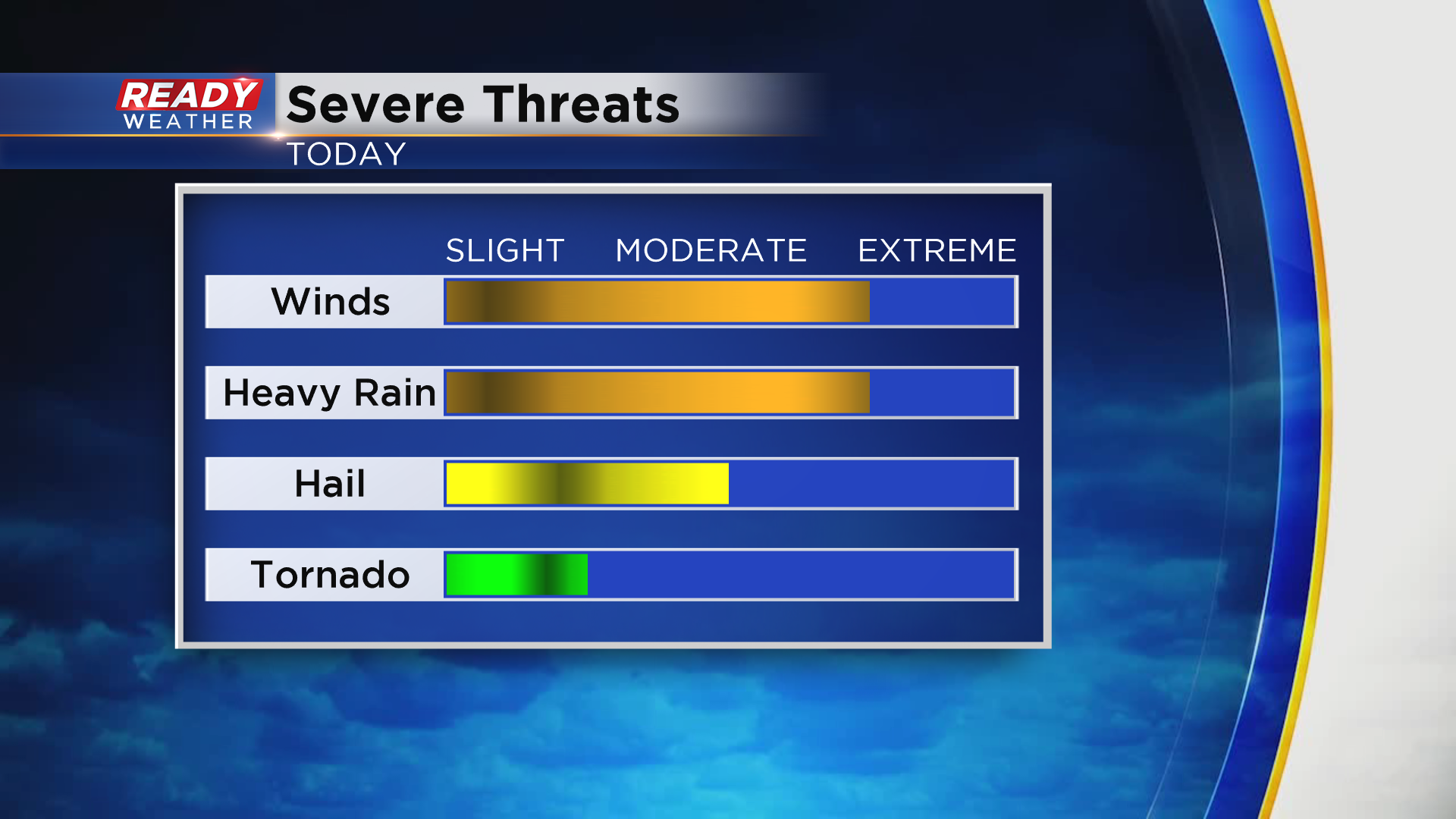 1:45 pm Update: A Severe Thunderstorm Watch has been issued until 9 pm for all of SE Wisconsin besides Fond du Lac and Sheboygan counties. Damaging straight-line winds up to 70 mph are the main threat with storms, but we can't rule out an isolated embedded tornado within the severe line of storms. Large hail will be possible as well. 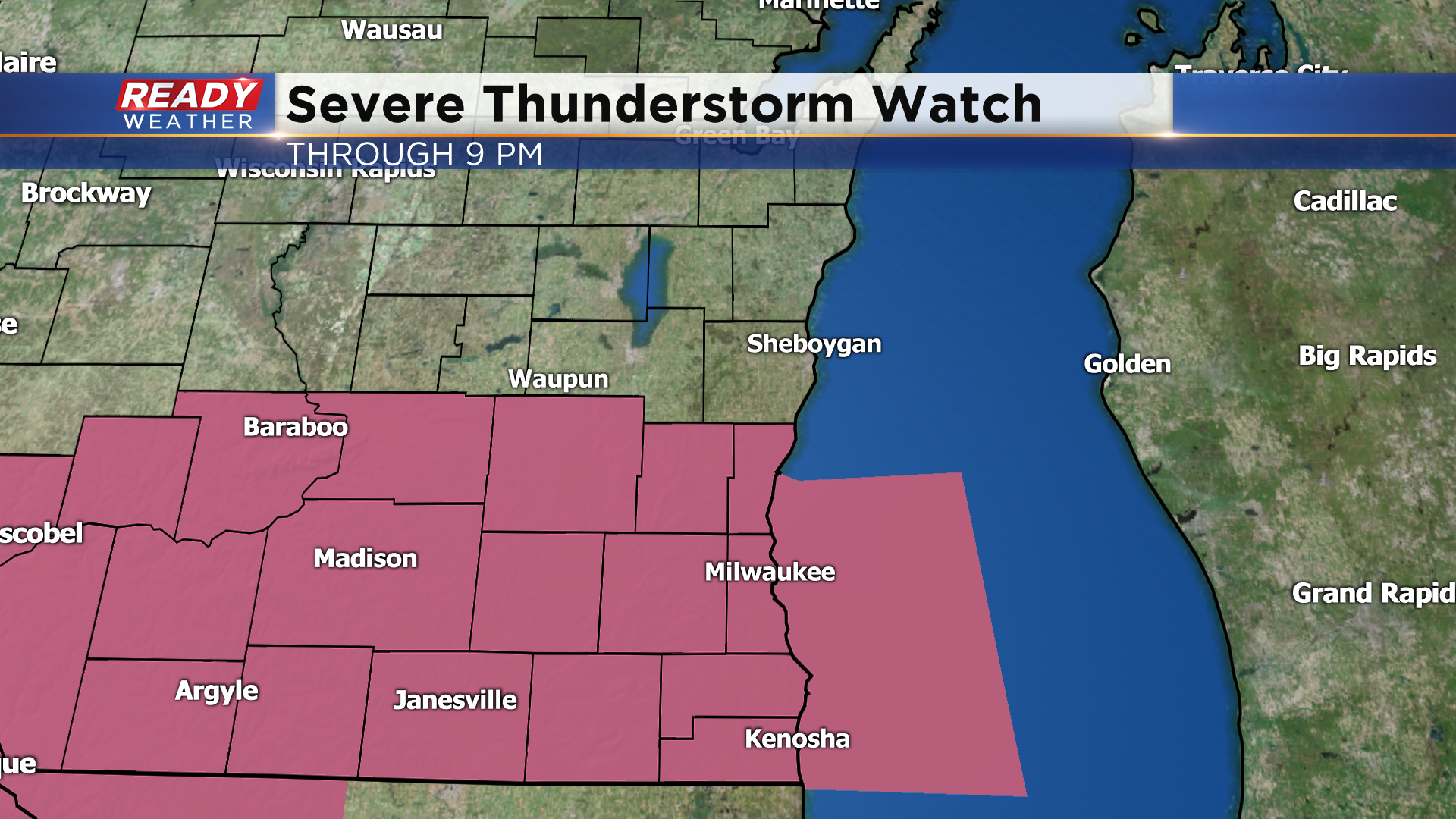 1 PM Update: All is rather quiet across SE Wisconsin as of midday with lingering cloud cover. However, there have been some breaks/thinning in the clouds to our west. We're watching the storms in eastern Iowa for further development as they move into Wisconsin this afternoon. 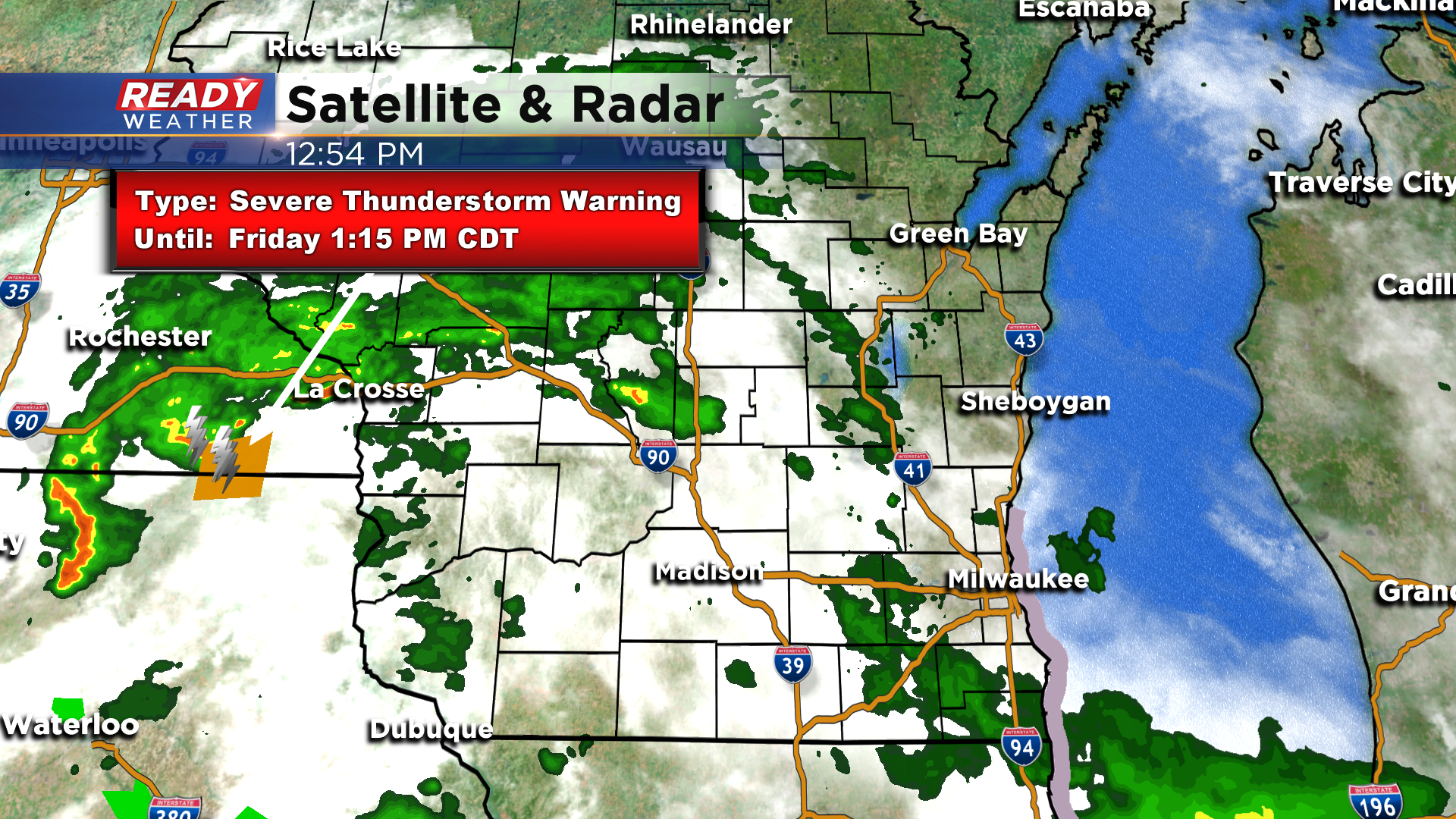 The more breaks in the clouds we see ahead of these storms, the more likely they will be severe with damaging straight-line winds and isolated embedded tornadoes. The Storm Prediction Center says a watch (Tornado or Severe) will likely be issued by 2 pm. 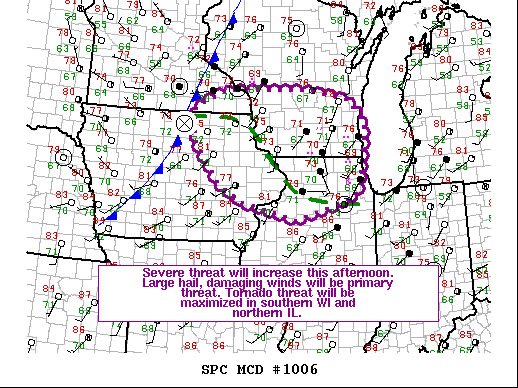 Download the CBS 58 Ready Weather App to track these storms as they move close to the area.

We had one round of rain move through earlier this morning, with another round working its way across southern Wisconsin as of 11 am. 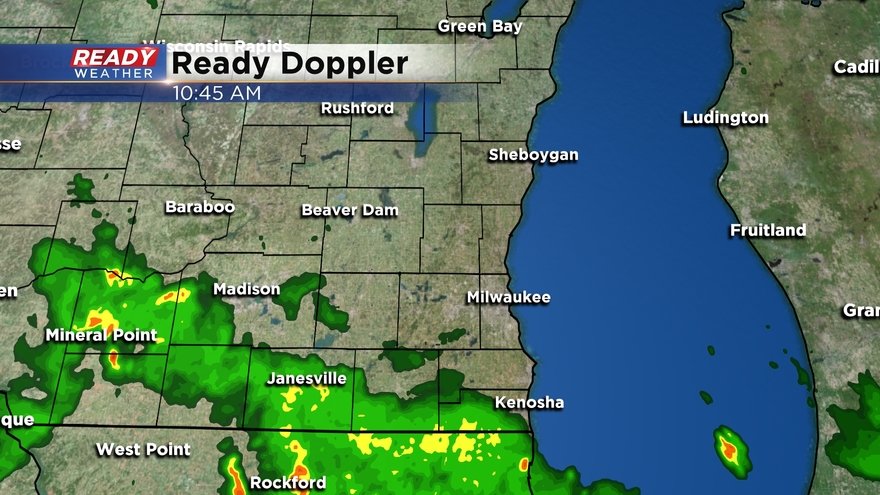 No severe weather is expected through midday as these showers and clouds will keep us stable. However, we will be watching for clearing to develop behind this area of rain. Right now this area features clouds, but any breaks or thinning in the cloud cover this afternoon as the system moves closer would be enough to fuel strong to severe storms.

Currently the window for severe weather looks to be between 3-8 pm. 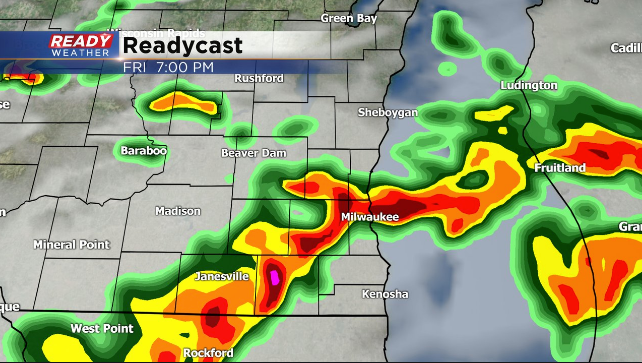 Most of southern Wisconsin, including our southern half of counties, has been put in the Enhanced Risk (level 3 of 5) for severe weather while our northern counties are in the Slight Risk (level 2 of 5). Damaging wind will by far be the main threat with wind gusts up to 70 mph with a few embedded tornadoes possible. Hail and heavy rain is also possible. Make sure you have a way to get severe warnings during this time and periodically check the CBS 58 Ready Weather app at least every 30-60 minutes. 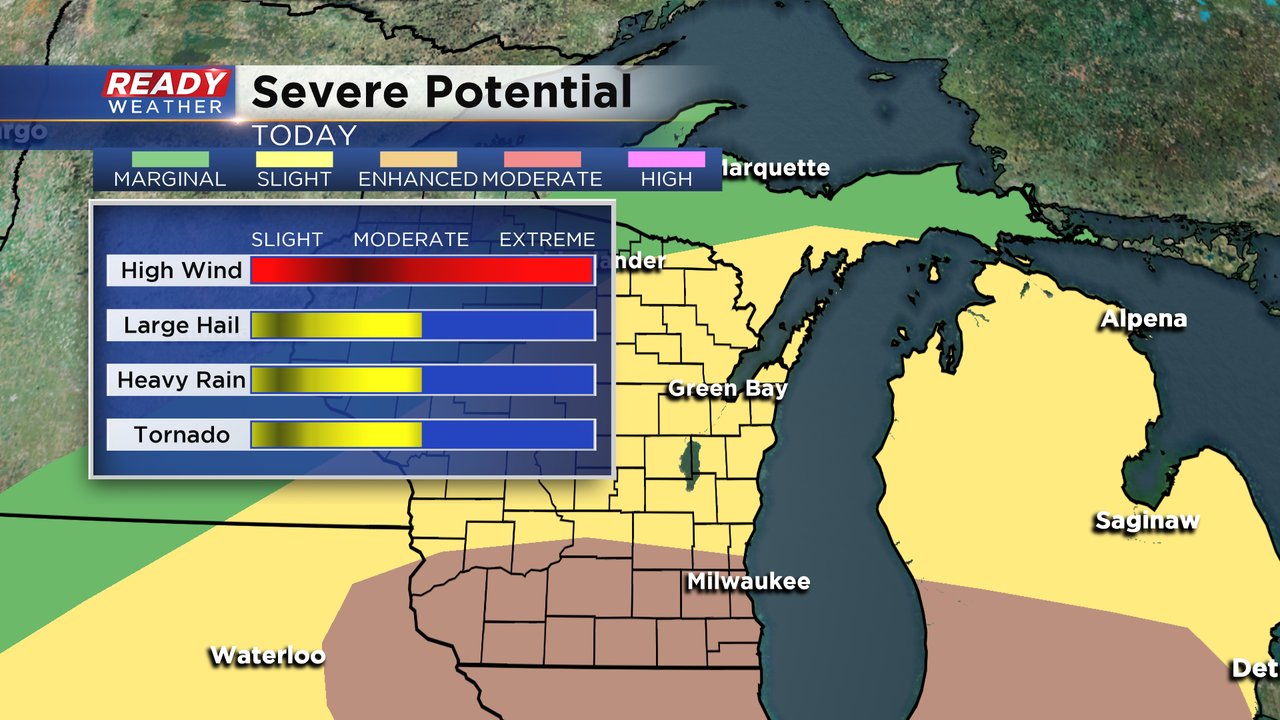 The area of heaviest rain will be heavily dependent on who sees the strongest storms. Most everyone can expect a half to full inch of rain but those that see stronger storms could see up to 1.50" of rain if not more. We are still below-average on rainfall for the month of June so a good soaking rain isn't a bad thing but too much rain in a short time could lead to isolated flooding. 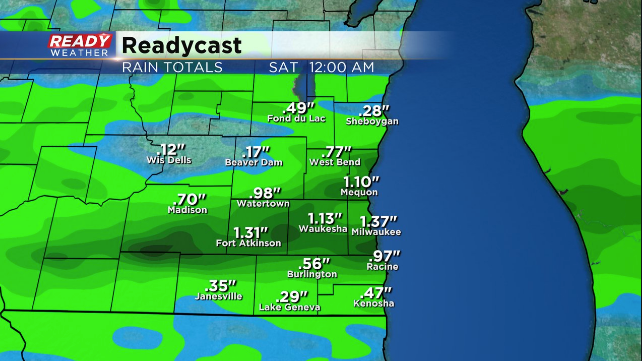 Download the CBS 58 Ready Weather app to track the storms, get alerts during warnings and see the hour-by-hour forecast.