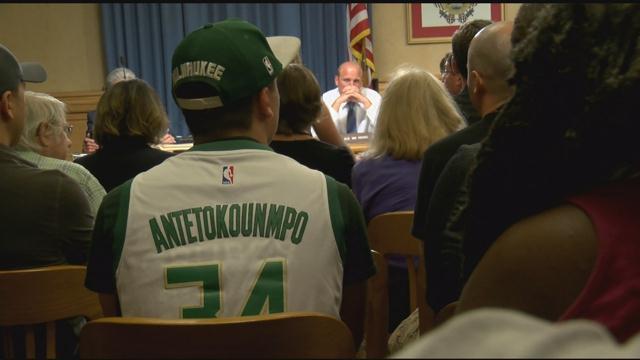 It was a packed house inside a small room at Milwaukee City Hall, as residents for and against the city paying for the Bucks arena addressed a common council committee.

One woman in favor of the plan said, \"I think this project will be catalytic to this city and for the development and how it will also spur development on Bronzeville, which has pretty much been non-existent for 15-20 years since it's been planned.\"

The city will use tax increment financing to contribute $47 million, but plus interest, it could be much more.

\"The full costs look like $76 million, but if you deduct the parking structure as an asset, maybe it's only 41 million,\" said Martin Matson, city comptroller. \"It really depends on your viewpoint on how you want to view the financing.\"

Some residents view the dollars and cents as misguided.

\"You have unemployment, homeless people begging for money on the streets because they want a sandwich or a place to sleep,\" said one man against the plan. \"Why don't you invest in the people?\"

\"We've got some problems in some neighborhoods with public safety, we've got serious poverty problems and we're going to continue to work on those problems,\" he said. \"But we can't lose sight of the positive things going on in this city at the same time.\"

No action was taken Monday's at the committee meeting.

The arena funding plan will go before two more common council committees in the coming weeks, before the full common council takes up the issue on September 22nd.