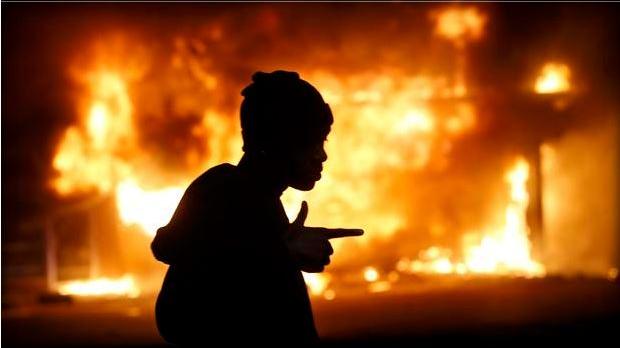 This was Ferguson early Tuesday morning.

Shattered glass from looted stores covered the asphalt. The smoke of tear gas lingered in the cold air. And more than a dozen buildings, including stores owned by local residents, were inexplicably set ablaze.

\"This ain't Iraq. This is the United States,\" Demetric Whitlock yelled to a line of police officers on South Florissant Road, in front of the Ferguson Police Department.

When a grand jury decided Monday not to indict Ferguson police Officer Darren Wilson in the shooting death of Michael Brown, the act triggered fresh confrontations between protesters and police in the tense Missouri city.

While most of the protesters were peacefully assembled on the streets of Ferguson, some smashed the windows of a police cruiser and set another on fire.

An entire row of businesses were set ablaze on West Florissant Avenue, a major street -- so many that firefighters weren't able to reach all of them.

Amid the looting and arson, some protesters demanded the media stop reporting on the events. A CNN reporter was struck in the head with a rock.

Protesters shut down Interstate 44. They set a row of cars on fire in nearby Dellwood and torched buildings in the city.

Some protesters told the agitators to stop throwing bottles, but their urgings fell on deaf ears.

Looters broke windows and doors of a beauty supply store and stole hair weaves and wigs and left the heads of mannequins strewn in the middle of the road.

\"People here have a real grudge against the police. It's not going away,\" Whitlock said.

The anger and dismay spread far beyond the borders of the St. Louis suburb. Crowds marched in New York, Los Angeles and Seattle. Protesters laid down outside the White House in Washington D.C.

More than 120 vigils and gatherings, both immediate and for Tuesday, were organized in cities large and small -- from Toledo, Ohio, and Bangor, Maine, to Los Angeles, Philadelphia and Detroit.

\"Hurting others or destroying property is not the answer,\" Michael Brown Sr. said. \"No matter what the grand jury decides, I do not want my son's death to be in vain. I want it to lead to incredible change, positive change. Change that makes the St. Louis region better for everyone.\"

It is an \"understandable reaction\" that some Americans will agree and others will be made angry by the decision to not indict Wilson, Obama said Monday night.

\"First and foremost, we are a nation built on the rule of law, so we need to accept this decision was the grand jury's to make,\" he said.

Brown's death ignited a national debate on race and law enforcement. Nowhere was the tension more evident than in the predominantly black town of Ferguson, which has a mostly white police department and town government.

Though the basic facts of the case -- that Brown was unarmed when Wilson shot him -- are not in question, the facts of the fatal moment are hotly disputed.

Wilson offered his version of events, some of which contradicted that of other witnesses.

After an \"exhaustive review,\" the jurors deliberated for two days, St. Louis County Prosecuting Attorney Robert McCulloch told reporters. He said the grand jurors are \"the only ones who have heard all the evidence.\"

The jury of nine whites and three blacks met 25 times, heard 70 hours of testimony from 60 witnesses and three medical examiners.

Unlike a jury in a criminal case, which convicts someone if jurors are convinced of guilt \"beyond a reasonable doubt,\" a grand jury decides whether there is \"probable cause\" to charge someone with a crime, based on testimony and evidence presented.

In Missouri, grand jurors don't have to be unanimous to indict, as long as nine of the 12 agree on a charge.

It also could have added a charge of armed criminal action, authorities said.

After two days of deliberation, they reached their decision.

\"The physical and scientific evidence examined by the grand jury, combined with the witness statements, supported and substantiated by that physical evidence, tells the accurate and tragic story of what happened,\" McCulloch told reporters.

Brown's father is \"devastated\" that Wilson will not face charges, a spokeswoman for Michael Brown Sr. said.

\"While we understand that many others share our pain, we ask that you channel your frustration in ways that will make a positive change,\" the family said in a statement. \"We need to work together to fix the system that allowed this to happen.\" The family made a call for police officers across the country to wear body cameras.

Through a statement issued by his attorneys, Wilson expressed thanks to those who have \"stood by his side\" since the shooting of Michael Brown.

So what will happen next?

The U.S. Justice Department is conducting two civil rights investigations: one into whether Wilson violated the civil rights of Brown, and the other into the police department's overall track record with minorities.

The investigations will likely require lots of time, if similar past cases are any indication.

\"Even at this mature stage of the investigation, we have avoided prejudging any of the evidence,\" Holder said. \" And although federal civil rights law imposes a high legal bar in these types of cases, we have resisted forming premature conclusions.\"

Back in Ferguson, residents worried about the toll Monday night's violence has taken on the quaint revitalized downtown.

One of the casualties was Ferguson Optical. Earlier in the day, manager Tim Marrah had put out the sign he has been displaying since August: \"We are family.\"

It was no protection against vandals. A storefront window was shattered and left barely standing.

\"This is crazy. I mean, this doesn't do anything,\" one resident told CNN.

She worried about how her city would pick up the pieces.

\"They're not going to rebuild. It's just going to be a ghost town pretty soon.\"