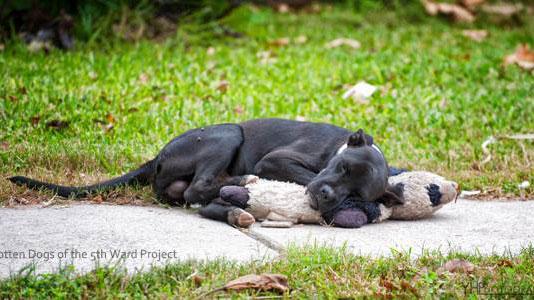 A photo of a stray dog being comforted by a teddy bear on a sidewalk in Texas is going viral.

The photos were taken by Forgotten Dogs of the 5th Ward.

Twice a week the organization rescues and gives food to abandoned dogs on the streets of Houston.

The organization posted a response about the photo after facing backlash from angry comments questioning why the organization only took a picture of the dog, but did nothing to help save it.

"I know that one of the first things someone is going to comment is "why did we not pick the dog up?". On one feeding route we can feed up to 50 stray dogs. Of those 50 dogs we are lucky if we are able to save one because the sad truth is, there are not enough foster homes to place these dogs into. This dog is in relatively good condition and sadly, when people see a dog in this shape they are less likely to step up to foster. So what we do is mostly post the dogs that are in worse shape and need immediate medical attention. This dog, without a doubt, depicts the plight of the dogs in our city."

On Wednesday, the group returned to the same spot the photo was taken in hopes of finding answers. The dog was gone, but they were met by an elderly gentleman slowly raking leaves off the sidewalk. His name is Calvin, he's 89, and when shown the photo of the dog, he quietly stated that he used to care for him, but despite his efforts the dog would continually run away.

Along with many other dogs he's cared for over the years, this dog was a rescue. At one point he had as many as 20 dogs in his back yard in an attempt to give them a better life than that of a stray. Throughout the conversation it became clear to Forgotten Dogs that the man cared very much for the dog, but was simply unable to keep him from jumping the fence, despite attempts to raise it. Though Calvin misses the dog, he said the dog clearly did not want to be contained.

In the summer, Calvin buys large bags of ice so the dogs have cold water to drink. A neighbor tells Forgotten Dogs that they would see Calvin walking back from the corner grocer with 50 lb. bags of dog food hoisted on his shoulders.

They were not able to help this now famed dog, but Forgotten Dogs of the 5th Ward is working to get Calvin's remaining dogs neutered and fully vetted.

Though this dog has been lost, he is certainly not forgotten.