Strangers bring waitress to tears with $400 tip, then gets bigger surprise 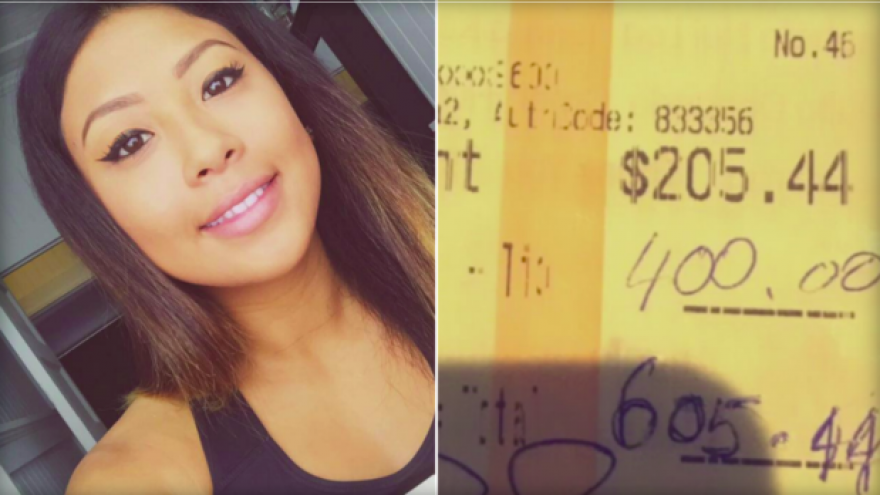 The 21-year-old moved to Waikiki, Hawaii, from Santa Rosa, California, for school. But with student loans and the high cost of living, Chandara didn’t want to slip into debt.

Instead of continuing her education, Chandara decided to take a step back. She accepted a job at a nearby Cheesecake Factory and Noi Thai Cuisine, hoping to save up enough money so she could return to school one day.

Little did she know, a group of strangers would make that happen faster than she could have ever imagined.

Chandara was serving two “life-long friends” and a 10-year-old girl visiting from Australia at Noi Thai Cuisine last week. They struck up a conversation, asking Chandara why she moved to Hawaii. Chandara told them about school and her dreams for the future.

The waitress thought the customers were just being polite. But as she cleared their table and collected their $200 tab at the end of the night her jaw-dropped.

“I was then at a loss for words and all I wanted to do was hug them,” Chandara told CBS News.

Chandara recalled where the couple said they were staying, and decided she would swing by after her shift to thank them properly.

“I genuinely wanted to say thank you,” Chandara said. “I sent a thank you letter saying how much it meant to me.”

She left it at the hotel’s front desk and slipped out -- never expecting to see the tourists ever again.

The next night, the woman and the little girl returned to the restaurant. They told Chandara they would like to give her $10,000 to pay off her student loans and to contribute to her continuing her college education.

Chandara was at a loss for words.

“I initially told them I couldn’t take that offer, but they insisted that it would be just as great for them to do it for me,” Chandara said.

With their help, Chandara told the generous tourists, who wish to remain anonymous, that she will go back to school in the fall to study business. She asked how she could ever repay them.

“They told me the best way to thank them is to be my best possible self, dream big and strive for my goals,” Chandara said.

The 21-year-old wants to thank the couple for not only helping her fulfill her dream of graduating college, but also for teaching her a valuable lesson.

“They have truly changed my life, not only financially but in the way I look at things. They are the most beautiful and kind-hearted people I’ve come across and I really look up to them and I can’t wait until they watch me graduate,” Chandara said.

She hopes the story of their generosity reminds others that there are still good people in the world.

“Always be genuine. You will get it right back. Good things happen,” Chandara said.