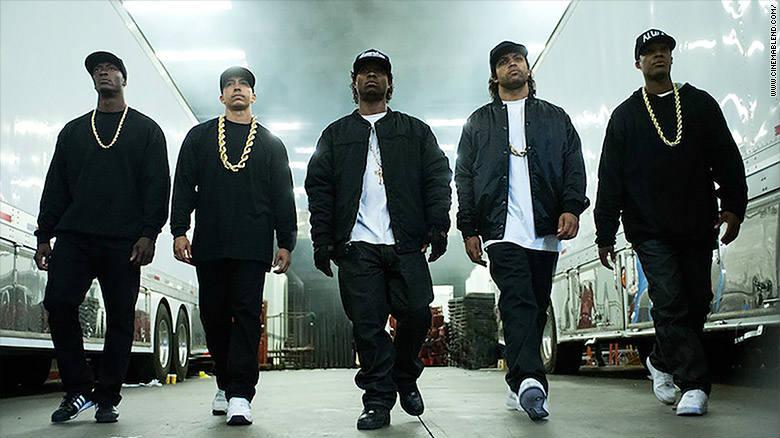 NEW YORK (CNNMoney) -- \"Straight Outta Compton\" went to the top of the charts this weekend with one of the biggest surprises of the summer box office.

The debut of the Universal biopic made an estimated $56.1 million at the U.S. box office -- nearly doubling its production budget of $29 million.

The film, which tells the origins of the influential rap group N.W.A. against the backdrop of 1980s Los Angeles, exceeded expectations. It was originally projected to bring in closer to $25 million for its debut.

\"Compton\" also represents one of the biggest openings in the history of August.

The film was boosted by strong reviews from critics -- it currently holds a 88% score on review site Rotten Tomatoes -- and audiences who gave it a CinemaScore of A.

\"'Straight Outta Compton' is for Universal yet another example of a perfectly realized distribution and marketing plan that brought an important story to the big screen,\" said Paul Dergarabedian, senior media analyst at Rentrak. \"Not only did audiences clearly love the film, but critics were on board as well.\"

The total is even more impressive considering that the film comes at the tail end of the summer season and stars relative unknown actors.

The film also gained a good amount of buzz due to the timing of its release, which comes after a year of heightened tensions between African-Americans and law enforcement.

This theme can be seen throughout the film as N.W.A. takes on the police in many of its landmark songs.