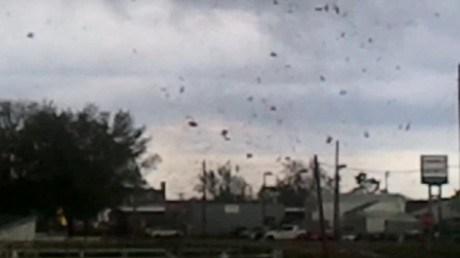 Two people were killed when a storm hit a trailer park in Nashville, Arkansas, Howard County Emergency Management coordinator Sonny Raulerson said Monday. There had been a tornado warning in the area.

Also, a fierce storm injured at least 26 people and caused significant destruction late Sunday in the Texas town of Van, officials said. The National Weather Service had issued a tornado warning in the area.

Warning sirens sounded before the storm hit Van. Fire Marshall Chuck Allen said early Monday that everyone had been accounted for and that there were no deaths in the town.

The destruction in Van followed the death of one person a day earlier in Eastland County, Texas.

Those injured in Van were taken to area hospitals, Allen said. About a third of the town was damaged, he estimated.

\"Damages range from completely destroyed homes, damaged homes, to trees and power lines down,\" he said. \"The initial response of emergency responders was to locate and identify any injured individuals.\"

The Red Cross is helping emergency officials and setting up a shelter at the First Baptist Church. Teams on foot and on ATVs were rescuing the walking wounded, and a triage area was set up at the church.

The Van Fire Department said on its Facebook page that a second storm cell struck at about 10:30 p.m., and a siren was sounded to make sure the emergency officials in the field took cover. The department said the area was not safe and urged people to stay away and off the roads.

Approximately 20 buildings were damaged, and residents were being asked to leave because of unsecured propane tanks, said Department of Public Safety spokeswoman Kristi Turman. There were no serious injuries from the storm, she said, but Delmont had no power, no water and no telephones.

A powerful storm also swept through Lake City, Iowa, ripping most of the roof off a local high school, said Mayor Gary Fahan. The people who had been inside the school for an award ceremony left the building when they heard the tornado sirens, he said, reporting that there were no injuries.

On Saturday, a tornado that struck Eastland County, Texas, west of the Dallas-Fort Worth area, killed one person and injured another critically, according to the local fire department.