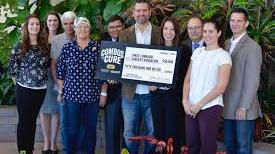 From September 1st until the 30th, a portion of each combo meal sold at all Wisconsin-based Cousins Subs will go to support research, treatments and ongoing cancer care programs for those affected by cancer throughout Wisconsin.

As Justin McCoy of Cousins Subs told the CBS 58 News at Four, the company believes strongly that with customers' help they can make a difference for those affected by cancer one meal at a time.

They are optimistic they can raise $50,000 by the end of the month.

The beneficiary will be the Coach Vince Lombardi Cancer Foundation.

Coach was known as a maker of champions. His spirit, enthusiasm and commitment to excellence have touched countless lives on and off the field.

Five National Football League championships are not easily forgotten. But more than a coach, Vince Lombardi was a human being who, on September 3, 1970, lost his most victorious battle when he died of colon cancer. He was fifty-seven.