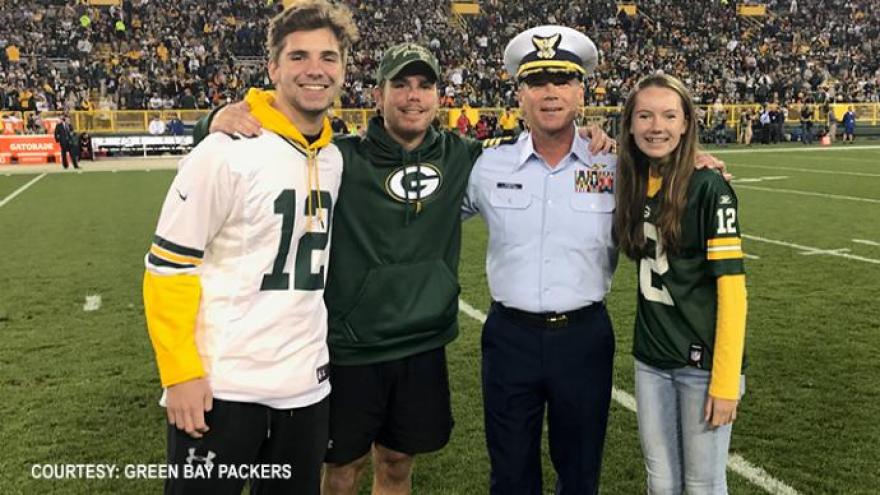 GREEN BAY, Wis. (WSAW)-- A Stevens Point native was honored Thursday by the Green Bay Packers for his military service.

Commander Mark Graboski and his family were selected as part of ‘Operation Fan Mail.’

Operation Fan Mail is designed to recognize families with a member who is on active duty. The Packers and WPS Health Solutions will host a family at each home game and recognize them on the field during pregame activities.

Graboski, originally from Stevens Point, attended the University of Wisconsin-Madison and graduated with a Bachelor of Science degree in economics through the Naval Reserve Officer Training Corps in 1989. He was commissioned an ensign in the U.S. Navy and completed deployments to the Western Pacific/Arabian Gulf and to the Joint Interagency Task Force South. In 1995, he began serving as a primary flight instructor at Naval Air Station Whiting Field in Florida.

In 2000, Graboski transitioned to the U.S. Coast Guard through the Direct Commission Aviator Program, serving in Washington, Alabama and Michigan.

Currently, Graboski serves as the executive officer and helicopter pilot at the U.S. Coast Guard Air Station in Traverse City, Mich., where he is responsible for leading a three MH-60 helicopter air station and 168 personnel for search and rescue operations throughout the Great Lakes and Midwest.

Graboski attended Thursday’s game with his sons, Sean and Cameron, and his daughter, Audrey.