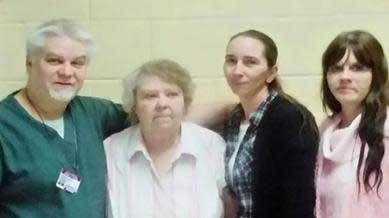 Steven Avery has filed an appeal, asking a judge to throw out his 2005 conviction for the murder of Teresa Halbach.

The appeal was signed by Avery on January 7th, and received by the Wisconsin Court of Appeals January 11th.

In the appeal, Avery says evidence obtained by police was done so illegally, violating the scope of the original search warrant. He also says Teresa Halbach's vehicle was not properly sealed with tamper-proof tape, allowing evidence to be planted inside.

The appeal, riddled with spelling errors, was written and filed by Avery.

"If Victims Vehicle was SEALED WITH TAMPER PROOF, (As Averys CAR WAS SEALED WITH EVIDENCE TAPE IT WOULD BE MORE LIKELY THAN NOT EVIDENCE BLOOD, ETC COULD NOT BE PLACED IN VICTIMS VEHICLE. WHY ALSO WAS THE VEHICLE MOVED IN THE PITCH BLACK OF NIGHT, When Forensics were done with vehicle during daylight hours."

Avery also says jurors were intimidated and influenced by one juror with preconceived notions that he was guilty.

"This tainted the other JURORS THROUGH DIRECT OR INDIRECT IN FLUENCE. C.W. MADE REPEATED, NUMEROUS, "HE IS (expletive) GUILTY" AS WELL AS TELLING OTHER JURORS IF YOU CANT HANDLE IT WHY DONT YOU TELL THEM AND JUST LEAVE. JUROR C.W. HAD PRECONCIEVED GUILTY OF AVERY."

Attorney Michael Maistelman of Maistelman and Associates, LLC, explains how that could impact the appeal.

"If they [Jurors] would have voted to acquit him, but they were afraid for their safety, their well-being, their kids well-being, that could allow a judge to vacate the judgement," he says.

Maistelman says proving that in court will not be easy.

"That's a very high burden to meet typically. You have to prove that outside influences actually influenced a juror to do something they probably wouldn't have done."

CBS58 learned on Friday that Avery has hired new council, based out of Chicago.

Tuesday, Kathleen Zellner, who is representing Avery, said "They won't quit until he's out."