Steve Bartman is receiving a World Series Ring from Cubs 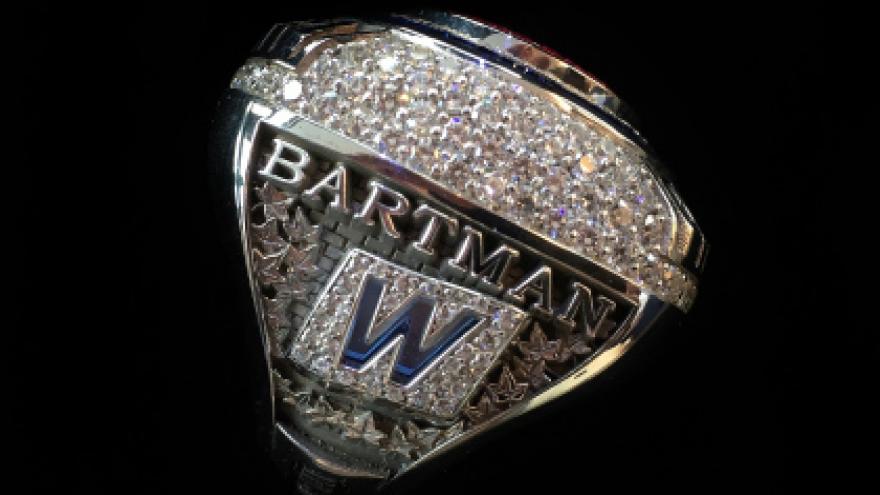 (CBS) Steve Bartman, the Cubs fan who infamously interfered on a key play in Game 6 of 2003 National League Championship Series and became a scapegoat amid the team’s postseason meltdown of blowing a 3-1 series lead, will receive a 2016 World Series ring from the franchise, the team announced Monday.

“On behalf of the entire Chicago Cubs organization, we are honored to present a 2016 World Series championship ring to Mr. Steve Bartman,” the Cubs said in a statement. “We hope this provides closure on an unfortunate chapter of the story that has perpetuated throughout our quest to win a long-awaited World Series. While no gesture can fully lift the public burden he has endured for more than a decade, we felt it was important Steve knows he has been and continues to be fully embraced by this organization. After all he has sacrificed, we are proud to recognize Steve Bartman with this gift today.”

With the Cubs leading 3-0 in the eighth inning of Game 6 and only needing five outs to advance to the World Series, Bartman interfered with Cubs outfielder Moises Alou on a foul ball down the left-field line. No interference was called because he didn’t reach into the field of play, but what followed ensured he’ll be a part of Cubs lore forever. The Marlins plated eight runs to secure a victory and went on to win Game 7 as well. In the aftermath of Game 6, Alou and manager Dusty Baker insinuated that Alou likely would’ve caught the ball and that the outcome could’ve been different. While there were many faults by Cubs players in the final two games of the NLCS, Bartman became an easy scapegoat.

Bartman has maintained a non-existent public profile since the 2003 incident. He did release a statement thanking the Cubs for the World Series ring.

In it, he called this gesture “the start of an important healing and reconciliation process for all involved” and asked that everyone continues to respect his privacy.

“Although I do not consider myself worthy of such an honor, I am deeply moved and sincerely grateful to receive an official Chicago Cubs 2016 World Series Championship ring,” Bartman said in his statement. “I am fully aware of the historical significance and appreciate the symbolism the ring represents on multiple levels. My family and I will cherish it for generations.

“Most meaningful is the genuine outreach from the Ricketts family, on behalf of the Cubs organization and fans, signifying to me that I am welcomed back into the Cubs family and have their support going forward. I am relieved and hopeful that the saga of the 2003 foul ball incident surrounding my family and me is finally over.

“I humbly receive the ring not only as a symbol of one of the most historic achievements in sports, but as an important reminder for how we should treat each other in today’s society. My hope is that we all can learn from my experience to view sports as entertainment and prevent harsh scapegoating, and to challenge the media and opportunistic profiteers to conduct business ethically by respecting personal privacy rights and not exploit any individual to advance their own self-interest or economic gain.

“Moreover, I am hopeful this ring gesture will be the start of an important healing and reconciliation process for all involved. To that end, I request the media please respect my privacy, and the privacy of my family. I will not participate in interviews or further public statements at this time.

“Words alone cannot express my heartfelt thanks to the Ricketts family, Crane Kenney, Theo Epstein, and the entire Cubs organization for this extraordinary gift, and for providing the City of Chicago and Cubs fans everywhere an unforgettable World Championship in 2016. I am happy to be reunited with the Cubs family and positively moving forward with my life.”