Stephen Colbert Calls Out Aaron Rodgers; Says He Needs to Step Up to Plate and Propose 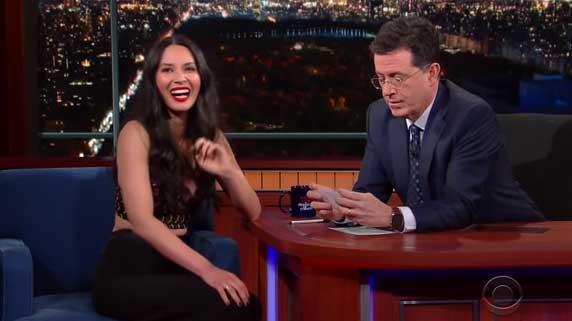 Olivia Munn spoke to Stephen Colbert on The Late Show about the rumor of her engagement to Aaron Rodgers.

“It’s just some random magazine decided to say it one day,” Munn said.

She said she didn’t think most people would listen to it and believe it.

Colbert said the follow up question though should be what is Aaron waiting for to ask her.

“He must think he is pretty special if he’s going to do better than this,” Colbert said, “Aaron are you watching? Step Up to the Plate.”

Munn said her mom believed it.

“The only way I knew to dispel the rumors was to use my mother and her text conversation with me,” Munn said.