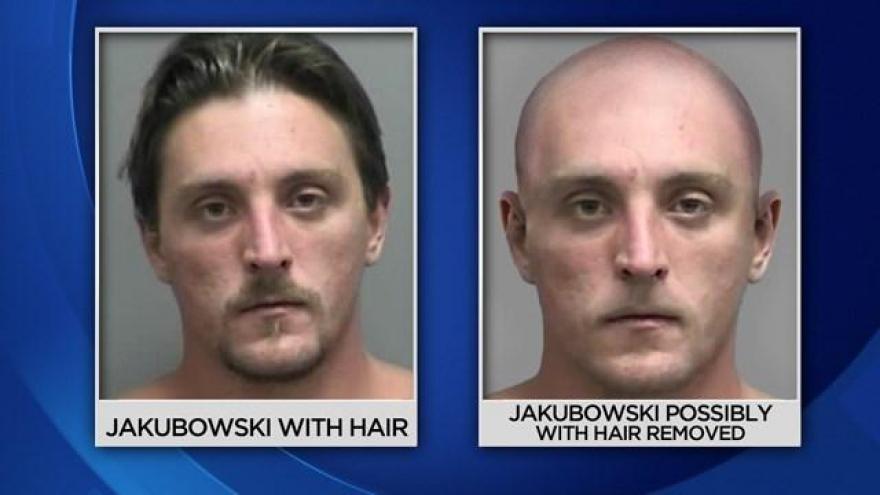 JANESVILLE, Wis. (AP) — The estranged stepfather of a Wisconsin man suspected of stealing guns and threatening attacks in an anti-government manifesto sent to the White House on Tuesday urged the fugitive to surrender.

Don McLean said his stepson, Joseph Jakubowski, has never had a good relationship with police and that he and his wife are concerned for his safety.

\"We just want him to give up. There's no good ending to this except him giving up,\" McLean, 54, told The Associated Press during an interview Tuesday in which he repeatedly pleaded for his stepson to surrender.

More than 150 state and federal law enforcement officers have been searching for the 32-year-old Jakubowski since April 4, when they believe he took 18 firearms from a gun store in Janesville in southwestern Wisconsin. Law enforcement found Jakubowski's burnt vehicle nearby and have investigated more than 400 leads in his pursuit.

An image of Jakubowski taken from a surveillance video at a gas station the day he disappeared adorns billboards on Wisconsin's interstates and on the road into Janesville, a rural city of about 64,000 where houses stand next to plots of farmland about 70 miles (110 kilometers) southwest of Milwaukee. The FBI on Tuesday released an image of Jakubowski that showed how he might look with the hair on his head and face shaved off, saying investigators believe he may have altered his appearance.

The FBI also announced it was increasing the reward for information on Jakubowski's whereabouts from $10,000 to $20,000.

Rock County Sheriff Robert Spoden has said Jakubowski threatened to attack schools and public officials in the 161-page manifesto that he mailed to President Donald Trump. Jakubowski spoke of a \"revolution\" in a video that shows him dropping a package addressed to Trump in a mailbox.

The White House has not commented on Jakubowski's manifesto.

McLean said his stepson has a history of clashing with police and he's worried about what will happen if there's a confrontation.

\"What I know is every time he has a confrontation with the police, it almost always goes violent. He's always been anti-police,\" McLean said.

Janesville Police Chief David Moore said Jakubowski has had several run-ins with police, mostly for traffic violations, and that he once tried to disarm an officer in 2008 during a traffic stop. The officer said he repeatedly punched Jakubowski during the altercation, according to the police report. While on the ground, Jakubowski appeared to urge another arriving officer to shoot him, saying \"Just (expletive) do it.\"

Authorities are urging the public to call with information on his whereabouts but are warning people not to approach him. The sheriff's office has said Jakubowski also has a bulletproof vest and a helmet. On Monday, the sheriff's office released photos of tattoos Jakubowski has on his right arm. On his right hand one says \"True.\" He has \"BOS\" on the upper part of his arm, among others.

The manhunt for Jakubowski is a topic of conversation around the city that House Speaker Paul Ryan calls home. But for many it has not changed their routines. Teenagers from Craig High School fished in the Rock River along Main Street while on spring break and businesses had their doors open.

\"I think we're probably the safest city in the nation. There's so many officers and cars,\" said Joni Bozart, who has an antiques shop on Main Street. \"I'll be grateful if I don't get a speeding ticket because they're at every corner.\"

McLean said he has not talked to his stepson since he kicked him out of their house two years ago because of \"differences of opinion.\" McLean said Jakubowski once worked as a roofer, but he didn't know where he was living or whether he had been recently employed.

McLean said he became Jakubowski's stepfather when he was around a year old.

\"He was a good kid. I mean, he was all right. Then as he grew up, adolescence took over. Not listening. You get to an age where you know more than your parents. Just that, standard stuff,\" he said.

McLean said he knows Jakubowski is mad at him, but he wanted him to know his parents don't want to see him get hurt or for him to hurt anyone else.

\"His mother wants him, would rather have him alive. I want him alive,\" he said. \"Whatever he's doing, I can't see it ending well unless he surrenders.\"

Anyone with information on Jakubowski's whereabouts is asked to call 1-800-CALLFBI.