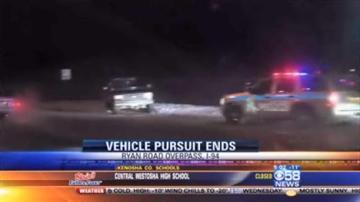 OAK CREEK -- A Wisconsin State Patrol trooper used a PIT maneuver to catch a driver who refused to stop on Ryan Road near I-94 early Tuesday.

Officials say the short chase began just after 3:30 a.m. near the Milwaukee/Racine county line and that the technique used requires authorities to position their squad car a certain way to stop a fleeing driver.

The pickup truck involved in the pursuit was seen resting on top of a snowbank, facing the road on the Ryan Road overpass.

No one was injured and it's not clear what prompted the short chase.