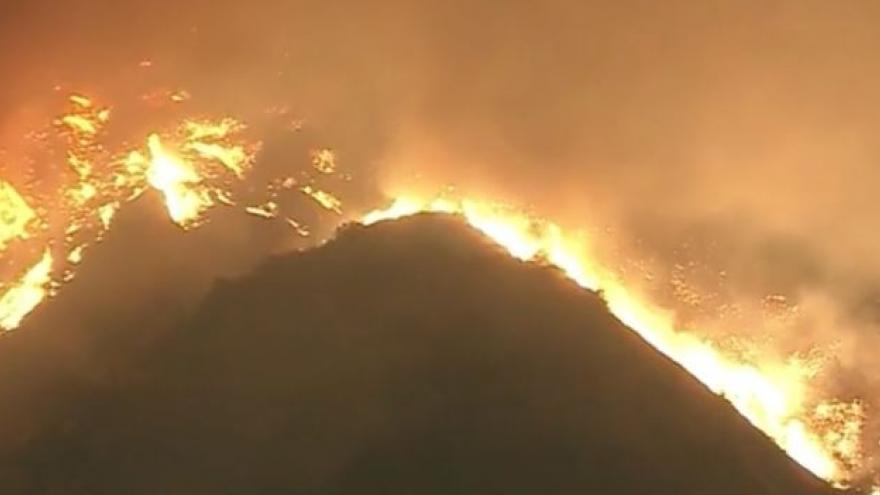 (CNN) California Gov. Jerry Brown issued a state of emergency for Los Angeles County on Sunday due to the ongoing La Tuna brush fire near Burbank.

Since the fire started Friday, it has burned more than 5,895 acres, forced residents to evacuate from their homes, shut down an interstate and sent massive plumes of smoke into the air.

Brown's declaration will allow state personnel and equipment to be used in fighting the fires, at the direction of the California Office of Emergency Services.

More than 1,000 firefighters from the immediate region and throughout California are battling the fire, which has destroyed three homes and damaged one other, Los Angeles Fire Department Chief Ralph Terrazas said during a press conference Sunday. Burbank is in Los Angeles County.

There are 206 fire engines and nine helicopters dedicated to fighting the fire, Terrazas said. Two firefighters have suffered heat-related illnesses, but are in stable condition.

The fire started Friday and tore through the La Tuna Canyon Park area of the Verdugo Mountains, the Los Angeles Fire Department said. A section of Interstate 210 remained closed Sunday as a result of the fire and smoke, but Terrazas said it should be reopened by Monday morning.

Los Angeles Mayor Eric Garcetti signed a declaration of local emergency on Saturday that instructed all city agencies to "take all necessary steps to protect life and property in the area" affected by what is now the largest fire the city has ever seen.

"The La Tuna Canyon Fire is an emergency that requires all available resources to protect our residents and keep our homes and other structures out of harm's way," Garcetti said in a statement.

There were four reports of injuries: two people suffered dehydration and two had minor burns. The fire is 15% contained, he said.

"We do not have this fire contained," Garcetti said, but officials have "identified ways we can bring this fire to rest" in coming days.

Rain on Sunday was a mixed blessing, Terraza said, as it brought much needed moisture, but also strong winds that have blown the fire around.

At least 100 firefighters who were sent to Houston to help in Hurricane Harvey recovery efforts were heading back to California to help with the fire, Terrazas said at the Saturday news conference.

According to Terrazas, it is the largest fire, by acreage, that the Los Angeles city area has ever seen.

"These weather factors will result in the potential for rapid fire spread in the warned area through at least Saturday evening," the weather service said.

There are currently more than 12,000 firefighters battling 19 wildfires across the state of California, according to the California Department of Forestry and Fire Protection.