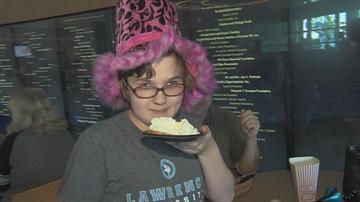 WAUWATOSA -- Thousands of families enjoy the Wisconsin State Fair every year.  But for hospital patients, they simply can't make it to state fair park to enjoy it.  That's why the fair comes to them

\"I think it's awesome,\" Emma Broeniman said.  She can't go to the Wisconsin State Fair this year...but she knows what part she likes.

What's there to complain about?  She's only had 29 surgeries, five chemotherapy protocols, more than 30 MRI's...had the lower part of her leg amutated...she's only 12 years old.

\"She's always in a good mood. She likes to do stuff like this.\"

Emma comes to Children's Hospital in Wauwatosa for treatment.  She was here for a checkup because her bones felt weak.

Amie says Emma has dealt with these issues since birth.

\"Emma has a genetic disorder called neurofibromatosis and has multiple brain tumors because of it.\"

So when the Wisconsin State Fair brought games, prizes, and cream puffs to the hospital Tuesday, it was a relief of sorts.

\"It's nice to give them a taste of the outside,\" Amie said.  \"She was kind of excited to see that there was something fun going on. She was really excited because there were crafts to do.\"

Even though they can't wander around State Fair park like others, Amie thinks bringing it to the kids is a great idea.

there's so many people.\"

And if that's not enough, Emma wanted to reiterate...

This is the fourth time State Fair has done this.