'Star Wars: The Force Awakens:' How to visit stunning location 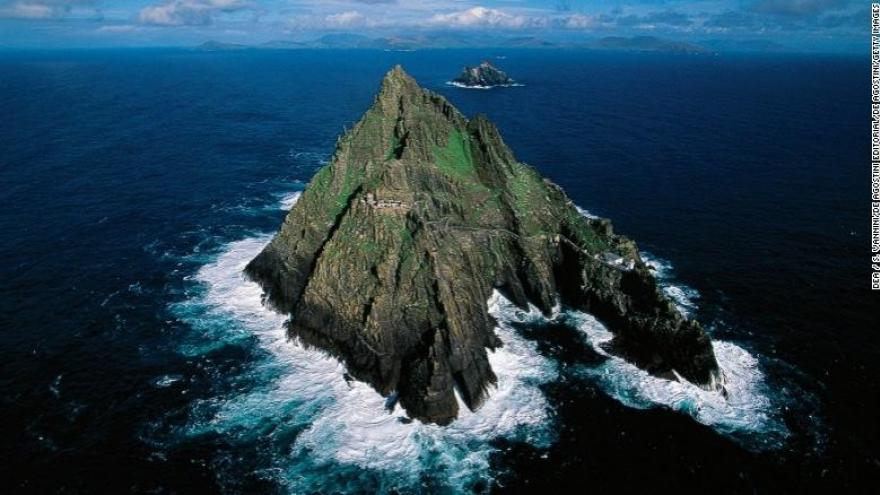 The blockbuster final scene of "Star Wars: The Force Awakens" ends atop a spectacular mountain island with the heroic Rey (Daisy Ridley) extending a light saber to Luke Skywalker (Mark Hamill) for what feels like an eternity.

But the scene leaves fans with many questions.

Why does Luke look like he's been sleeping under a park bench for 30 years?

Is Rey's arm getting tired holding that thing while Luke just stares open-mouthed?

Why didn't Chewie park the Millennium Falcon at the top of the mountain -- or at least drop Rey off?

And just where in this not so far away galaxy is this gorgeous, rugged setting?

The actual location of the formidable Jedi meet-up is Skellig Michael, an imposing, windswept hunk of rock and a UNESCO World Heritage Site in County Kerry, 12 kilometers off the southwest coast of Ireland.

The island's craggy and vertiginous peaks are uninhabited -- but were once the site of a sixth-century Christian monastery.

Visitors walk up 600 steep steps (not recommended for small children or others with trouble climbing) to the beehive huts of what was once one of Europe's most remote religious communities.

The sense of isolation is humbling, and the views are nothing short of spectacular.

The island's forbidding location has traditionally discouraged crowds, but officials expect that to change.

Its prominent position in the film presents "a truly unique opportunity to highlight the South West and Ireland in 2016," Tourism Ireland has said, predicting a record year for visitors to the country in 2016.

The Skellig Experience information center is located on the mainland in Valentia.

Here, visitors can watch a 14-minute film about the island and -- during the April-September season, weather permitting -- book a two-hour boat trip that circles but doesn't land on the island.

Boats that land on the island depart daily from Portmagee, County Kerry.

It's advised to book well in advance.

Much more to see

Gorgeously green and incredibly friendly, the lush scenery and unique atmosphere of County Kerry have made it one of Ireland's most popular travel regions.

Heading out from the tourist hotspot of Killarney, the Ring of Kerry is renowned for its glorious views, sandy beaches and ancient ruins.

Other regional attractions include the beautiful Gap of Dunloe, which is flanked by Ireland's highest mountains, the McGillycuddy's Reeks.

The Dingle Peninsula is lauded for its vast stretch of golden sand at Inch, scenic Conor Pass and beguiling eponymous town where you can kill a pint in the atmospheric Dick Mack's pub/hardware store.