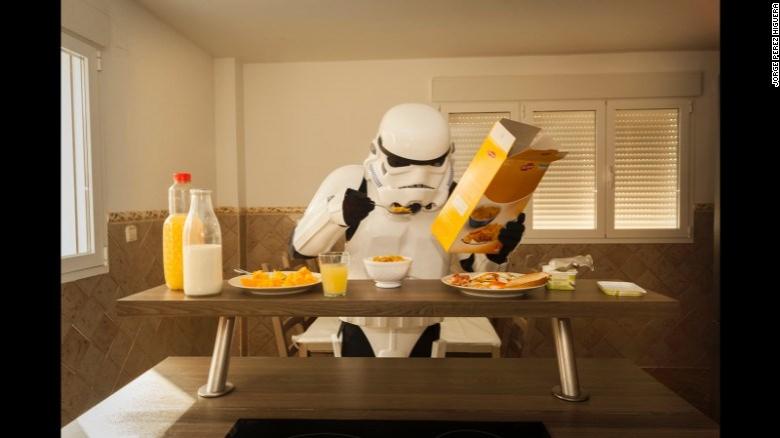 But we've never seen them go to the bathroom. Until now.

The faceless soldiers in the white armor are the subjects of "The Other Side," a new series of photos by Spanish photographer Jorge Perez Higuera that takes stormtroopers out of context and places them in mundane scenes of everyday modern life: grocery shopping, gassing up the car, doing laundry and ... yes, using urinals.

Higuera says he believes the average working person can relate to the pop-culture figures because they're the unsung grunts of the "Star Wars" universe.

"The stormtroopers have become a pop icon that we are all familiar with, and that is why I think we can identify ourselves with them," he said in an email to CNN. "I think the stormtroopers represent the galactic working class (let's be honest, if that future existed, we would probably be Imperial soldiers and not heroes or villains)."

The 26-year-old photographer says he chose stormtroopers for his project partly because the movie franchise -- from the original 1977 film to "Star Wars: The Force Awakens," coming in December -- appeals to multiple generations.

Their clone-like anonymity also appealed to him.

"We don't know anything about their identity because they are always wearing the uniform and we don't even know their gender, although we tend to presuppose it," he said. So the viewer must imagine for themselves whether the person behind the armor is male, female, young or old.

"I like to think that in my photography, I can represent everybody and nobody in particular."

The project is an unorthodox ode to humanity. In Higuera's world, the stone-faced stormtroopers can express vulnerability, grief and even love.

And it's hard not to chuckle at the visual disconnect of a stormtrooper knitting, or eating a bowl of cereal.

"The most important thing for me is ... underlining all the fun aspects in each tiny little detail from our day-to-day life," Higuera said when asked what he's trying to say with his photos.

"If this message doesn't fully come across, I would still be satisfied knowing that people can feel connected to some of my photographs, even if it's simply by bringing a smile to their faces or laughing out loud."